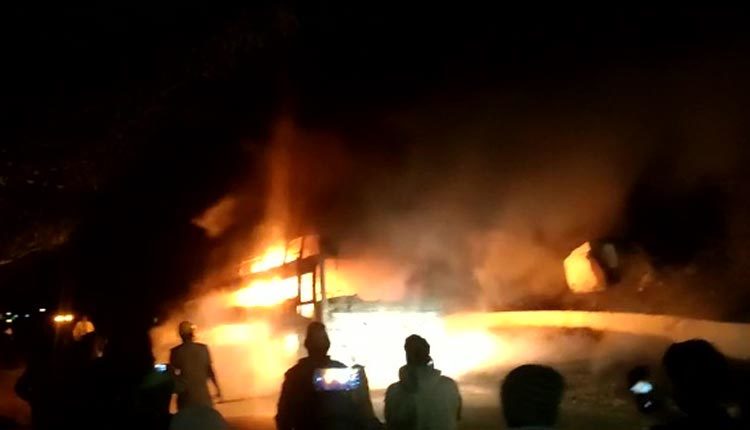 Rayagada: Over 50 passengers had a close shave after the bus they were travelling in caught fire near Tarini Chhak in Rayagada district’s Siriguda on Friday night.

The mishap happened when the bus was on its way to Polasara in Ganjam district from Kasagumuda in Nabarangpur district, according to reports.

Despite efforts from the fire fighting teams, the bus was completely charred. Short circuit is thought to be the main cause of the mishap.

“At around 12 in the midnight, we witnessed smoke coming out of the bus. When we inquired, the bus staff told us to remain calm. After an hour, we again found smoke and fire in the bus but the staff insisted to stay inside. When the bus catches fire completely, they told us to vacate the vehicle,” a passenger said.

He further alleged that the bus had no fire safety equipment. “The bus staff didn’t alert the passengers onboard. Their callousness would have cost several lives. We are fortunate to be alive today,” he added.

According to the passengers, the bus driver and conductor fled the spot and the local police also didn’t come for rescue.

“The bus was overloaded. Though we complained of a possible fire, no staff of the bus listened to us. Important documents of several students were charred in the fire,” another passenger said.

Odisha To Experience Warm Weather For Next Three Days