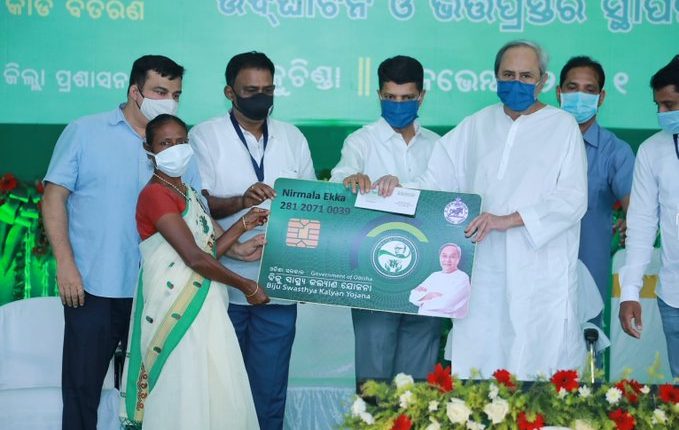 The chief minister distributed the smart health cards at a function in Kuchinda of the district. The district administration will distribute the smart cards among 7.73 lakh population.

Sambalpur is the state’s 8th district where Naveen has launched the BSKY smart card facility so far. He had introduced the facility in Mayurbhanj district on October 22.

Speaking on the occasion, the chief minister said Odisha is first state in the country to implement the smart health card facility. So far, over 10 lakh families have received the smart cards and 10,000 people availed the benefits of the scheme which was kicked off on September 1, he added.

The chief minister had announced that the government would launch the smart health card facility at the last Independence Day function.

The health cards under BSKY will be provided to 3.5 crore people of 96 lakh families. Each family can avail treatment cost upto Rs 5 lakh per annum and women members upto Rs 10 lakh. The card holders can avail treatment at 200 hospitals across the country.

The chief minister announced that the state government has set up a fund of Rs 147 crore for treatment of road accident victims. Stating that first 48 hours are crucial for mishap victims, he said the fund will be utilised to ensure that they get the treatment as soon as possible.

He also laid foundation stone of projects worth Rs 1553 crore and inaugurated the projects taken up at a cost of Rs 350 crore. Stating that Rs 1,000 crore has been sanctioned for supply of drinking water to households in the district, he said each household will get the facility by 2022.