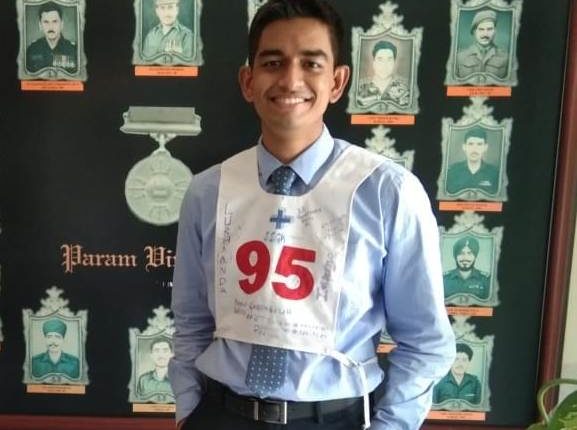 Bhubaneswar: Ronit Ranjan Nayak, who topped in the National Defence Academy (NDA) examination this year, has attributed his success to the defence environment he has been brought up in the family.

Ronit said since the examination was tough, he has has been preparing for it since long. Along with the annual board examination, he prepared for the NDA as both have same subjects. Since he was studying in a regimental school in Kolhapur of Maharashtra, it also helped him a lot, he added.

In his first attempt at NDA, Ronit cleared the written examination but could not clear the interview conducted by Services Selection Board. But he was not frustrated by it and worked on his handicaps and came out successful in the second attempt.

Attributing the credit for the achievement to his father Rashmi Ranjan Nayak, who is an Indian Navy officer, Ronit said he was very supportive all along. He guided the young boy in all his actions.

“I kept on going and my father kept on supporting me whatever I did,” said Ronit, who had primary education in the Naval Public School in Goa. Not only his father, Ronit said his sister sister, mother and school friends supported him in his preparation.

On her brother’s achievement, Ronit’s sister Richasmita, who is an IT professional in Infosys, said they expected him to come in top 10 in the examination as he had performed very well in the written test. But they never thought that he would bag all India rank 1.

“Ronit is one of the finest personalities we have in our family. I am sure he would excel in everything he does and make us all proud in his services to the country,” said a proud elder sister.

Embark On An Inward Journey To Discover Yourself This Shivratri