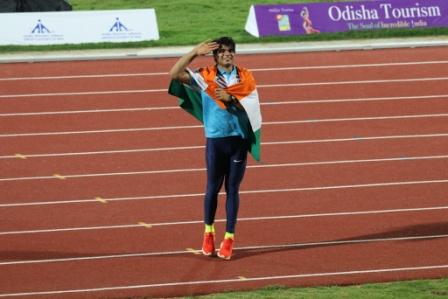 Bhubaneswar: The Indian relay teams ended the 22nd Asian Athletics Championships with gold medal-winning performances in both the men’s and women’s races, while world junior champion Neeraj Chopra lived up to his top billing but left it to his last javelin throw to clinch gold with a new meets record, giving India a total of 29 medals to conclude a successful event for the host nation.
India ended the Asian Championships with 12 gold, five silver and 12 bronze, topping the medals tally. China finished as runners-up with 20 medals that included eight gold.
Qatar’s Ahmed Bader had established an early lead in the throws but Chopra found his rhythm towards the later stages of the event, throwing a distance of 85.23m in his last attempt to pull clear into first place. Former national champion Davinder Singh Kang threw 83.29m as both the Indians finished on either side of Bader, who won silver.
The men’s relay team ran away with the gold medal in the 4x400m final on the last track event at the 22nd Asian Athletics Championships. The team comprising Kunju Mohammed, Amoj Jacob, Muhammad Anas and Rajiv Arokia combined to complete the race in 3:02.92, almost a good two seconds above Sri Lanka who finished with a silver medal.
In the women’s race, 400m winner Nirmala Sheoran anchored India to victory despite a stutter during the baton exchange at the last lap. GovindanLakshmanan returned to the Kalinga Stadium after the first day where he had won gold in the men’s 5000m.
On the final day of the Asian Athletics Championships in Bhubaneswar on Sunday, Lakshmanan ran an inspired 10000m to complete a long distance double, improving on his performances from the last edition where he had won bronze in the 5000 and silver in the 10000 race. Thonakal Gopi finished just behind him to take silver, making it a medal rich evening for India.
Archana Adhav appeared to have made up for Tintu Luka’s DNF (did not qualify) as the Indian middle distance runner finished first in the women’s 800m, but her joy soon turned into disappointment as she was deemed to have made a push at Sri Lankan sprinter Nimali Arachchige. The gold medal was awarded to Arachchige instead, making it a Sri Lankan one-two with Gyananthika Thushari winning silver, and fourth-placed Fumika Omori was elevated to bronze.
Tintu Luka, the defending Asian Champion as well as the 2014 Asian Games silver medalist, retired to the sidelines 150m into the 400 of the two-lap race.
Swapna Barman had a painful road to winning a gold medal in the women’s heptathlon event, finishing fourth in the final leg of the event – the 800m race – but had done enough to secure the first position despite collapsing to the ground in pain immediately after the race.
Barman’s aggregate of 5942 points was 59 more than second-placed Meg Hemphil from Japan, while Purnima Hembram repeated her 2015 bronze medal performance to finish third.
There was disappointment for India in the sprint events at the start of the evening session, with Dutee Chand and Srabani Nanda finishing fourth and fifth respectively in the women’s 200m, with Kazakhstan’s ViktoriyaZyabkina winning gold with 23.10 seconds, completing a hat-trick of 200m titles at the Asian Championships and a sprint double at these Championships. RumeshikaRathnayake of Sri Lanka won silver while Asian Games champion and silver medal winner at Wuhan, Olga Safronova of Kazakhstan, finished third.
India’s lone hope in the men’s 200m final Amiya Kumar Mallick ended the Championships with no medal, finishing seventh in a fiercely contested final, won by Yang Chun-Han of Chinese Taipei with a time of 20.66s. Park Bong-Ko of South Korea was a tenth of a second slower to take silver, and winner of the previous two editions, Qatar’s Femi SeunOgunode, finished three-hundredths of a second behind to settle for bronze.
India’s women discus throwers failed to make a mark in the event, with China’s Chen Yang and Liu Xiaoxin winning gold and bronze respectively. China also claimed a one-two in the women’s pole vault, taking their medal haul to five on the final day, while Kuwait’s EmbrahimAlzofari, who had been reinstated into the final of the men’s 800m after lodging an appeal and made it a nine-athlete final, won gold over Qatar’s Jamal Hairane, with India’s Jinson Johnson sneaking in
at the last stretch to claim bronze.