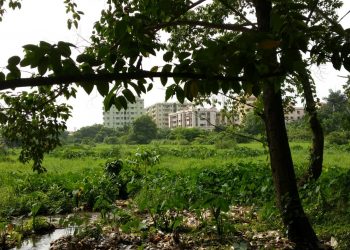 Bhubaneswar: The National Green Tribunal’s (NGT) East Zone bench in Kolkata has directed the Odisha State Pollution Control Board to check the quality of water at Nayapalli Haza, an important water body in Bhubaneswar.

The bench of B. Amit Sthalekar (Judicial Member) and A Senthil Ven (Expert Member) issued the direction on Monday after Bhubaneswar Municipal Corporation (BMC) filed a reply to a petition of RTI activist Srikant Kumar Pakala and Natabara Samantaray, a resident of Nayapalli, stating that it is incapable to deal with the encroachment over Nayapalli Haza.

The petition had raised the issue of encroachment of the water body, which serves as groundwater recharge and a reservoir throughout the year, and the natural drain No 10 connected to it. “Since the encroachment over Nayapalli Haza water body and natural drain No 10 connected to it are much in number and BMC has no such logistics to make them encroachment free, it has requested Bhubaneswar Development Authority (BDA) to conduct eviction,” BMC commissioner Vijay Amrut Kulange said in the affidavit.

The bench has posted the matter to January 9 for hearing along with OSPCB’s test reports and the state government’s action plan for protection, and preservation of the ponds/water bodies in the BMC area, sources said.