No Manuals, No Machines, No Feet Or Inches But Identical Year After Year: The Making Of The Puri Rath Yatra’s Chariots

Puri: There are no manuals or architectural drawings for reference. The 200-odd craftsmen don’t use any modern machines, using only traditional equipment like chisel. Measurement is done in units of ‘haat’ (hand size) and ‘anguli’ (finger size), not in feet or inches.

Year after year, for centuries, drawing from traditional knowledge and using only traditional techniques, craftsmen have been making identical chariots for Lord Jagannath and His sibling deities in Odisha’s Puri.

“The chariots are constructed afresh every year. There is no deviation in their heights, widths and other key parameters for centuries. However, new features are added to the chariots to make them more colourful and attractive,” Asit Mohanty, a researcher in Jagannath culture, told PTI.

“I have been engaged in chariot-making for about four decades. I was trained by my father Lingaraj Mohapatra and he received training from my grandfather Ananta Mohapatra. It is a tradition and we are privileged to get the opportunity to serve the Lord,” Bijay Mohapatra, the chief ‘Viswakarma’ (carpenter) of Lord Jagannath’s Nandighosh chariot, told PTI.

Asked how the ‘haat’ size has remained identical over the centuries, Mohapatra said, “My father gave me a stick. The stick is considered as one ‘haat’. It is equivalent to 20 inches. Twenty-five ‘angulis’ make a ‘haat’.”

The state Works Department gives fitness certificates to the chariots before they are pulled during the festival. A team of engineers from the department and railways are kept ready to carry out any emergency repair if required.

* Construction of the chariots begin on Akshaya Tritiya and takes about 57 days to complete.

* Seven groups of workers are involved in making the chariots. They are ‘Viswakarma’ or ‘Maharana’, who do the actual construction; ‘Karati’ or carpenters who help cut the wood; ‘Bhois’ who carry the wood and assemble it; ‘Lohara’ or blacksmith who work with iron, the ‘Roopkars’ or wood carving artistes who create sculptures around the chariot; the ‘Chitrakars’ or painters, who make different motifs and paint the chariots; and ‘Darji’ or the tailors who work on the cloth pieces used in the chariots.

* More than 200 people are involved in the process. Of these, 77 are ‘Bhois’ who play a major role even after the construction is completed, in moving and steering the chariots.

* The chariots have specific heights and number of wheels that never change.

* Lord Jagannath’s chariot Nandighosh is 45.5-ft high with 16 wheels and the roof is covered with red and yellow fabric.

* Lord Balabhadra’s chariot Taladhwaja is 45-ft high, has 14 wheels and the roof is covered with red and green cloth.

* Devi Subhadra’s chariot Devidalana is 44.5-ft high, has 12 wheels and the roof is covered with red and black fabric.

* Around 865 trees are cut every year to build the chariots. The chariots are carved out of Asana, Dhaura, Simli and Phasi trees. The wood is brought from Nayagarh and Khurda.

* No iron nails are used and yet they stand strong. Reason? Some incredible assembling and huge nails made of wood are used. The process is locally known as ‘salabendha’.

* After the festival is over, ‘Bhois’ dismantle the chariots. Major portions are auctioned. The remaining wood is sent to the temple kitchen. 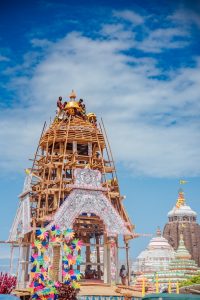 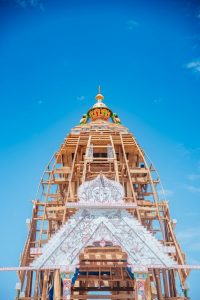 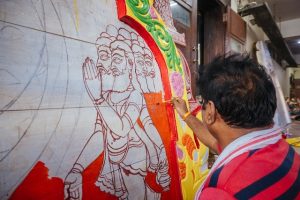 Droupadi Murmu Dials Oppn Leaders For Support, Naveen Reiterates Efforts To Get Every Vote From Odisha