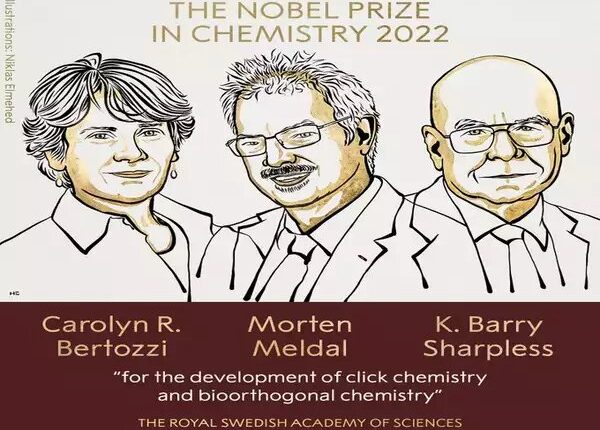 New Delhi: The Nobel Prize in chemistry was awarded to Carolyn R. Bertozzi, Morten Meldal and K. Barry Sharpless on Wednesday at the Royal Swedish Academy of Sciences in Stockholm for click and bioorthogonal chemistry.

In 2021, the Nobel prize in Chemistry was awarded to scientists Benjamin List and David W.C. MacMillan for discovering an environmentally cleaner way to build molecules while in 2020 the award was given to Emmanuelle Charpentier and Jennifer Doudna for discovering gene technology tool CRISPR/Cas9 genetic scissors.

The Nobel prize announcements kicked off on Monday with Swedish scientist Svante Paabo receiving the award in medicine for his work on Neanderthal DNA.

The Nobel Prize for Literature will be given on Thursday, Nobel Peace Prize on Friday and the Economics award on Monday. The Nobel prizes carry a cash award of 10 million Swedish kronor (nearly $900,000) and will be handed out on December 10.

BREAKING NEWS:
The Royal Swedish Academy of Sciences has decided to award the 2022 #NobelPrize in Chemistry to Carolyn R. Bertozzi, Morten Meldal and K. Barry Sharpless “for the development of click chemistry and bioorthogonal chemistry.” pic.twitter.com/5tu6aOedy4

Father-Daughter Duo Among 4 Killed In Road Accidents In Odisha