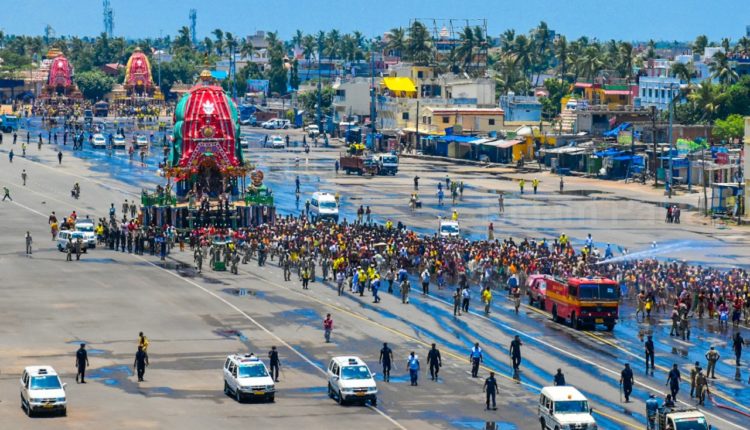 Puri: In a move to further tighten the measures to prevent congregation during Rath Yatra, here, the district administration on Saturday announced that nobody will be allowed to watch the pulling of chariots from rooftops along Bada Danda (Grand Road).

Speaking to media persons, district SP K Vishal Singh said the local administration has identified 200 private residential buildings and 41 hotels and lodgings along the Bada Danda and further survey is on to finalise the list. The families staying in their houses will not be allowed to watch the Rath Yatra from their rooftops, he said adding that adequate police personnel will be deployed to ensure it.

Besides, the hotels and lodgings have been directed not to accept booking 2-3 days before car festival and prevent their occupants from coming out on the day.

The SP further said the Pilgrim Town has been divided into 12 zones where security forces will be deployed to prevent the people from coming to the Grand Road on the day. All entry points to the town will also be sealed for this purpose.

Stating that curfew will be clamped on the night before the Rath Yatra and it will remain in force till the morning after the festival, Singh said the arrangements made during Devasnana Purnima will be further tightened this time.

He appealed to the residents of the town to follow the instructions of the district and police administrations to ensure conduct of the Rath Yatra scheduled on July 12.

Covaxin Phase 3 Trial Data Out, Here’s How Effective It Is Against Delta Variant