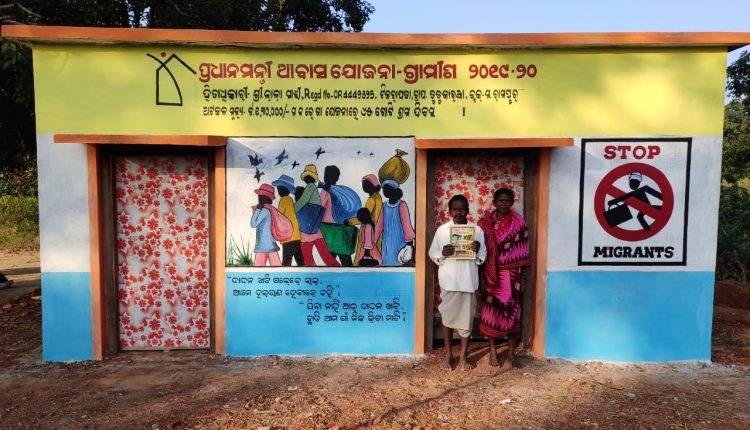 Bhawanipatna: The district administration has initiated a new idea to curb the migration issues of Kalahandi. It has started advertising on the walls of houses provided under Pradhan Mantri Awas Yojna (PMAY) 2019-20. The plight of the migrants has been highlighted in Odia language alongwith paintings of workers going outside in search of livelihood.

Around 50 houses out of 3000 have got the work order out of which three have been completed in Madanpur. Rampur block, about 65 km away from here has a population of 80,000 in the tribal dominated pockets of 19 gram panchayats. The literacy rate is 57 percent.

In the first phase, a house was provided to a beneficiary at a cost of Rs 1.30 lakh and a punch line was tagged on the wall, “Dadan khati gale re sab-Ame hairan hebar nahi. Jiba nahi au dadan khati-chhadi ame gaon bhita mati”. (Everybody went out as migrant workers, we don’t want to be harassed. We will not go outside in search of work anymore leaving our native place.)

The punch line has been tagged so that villagers can read and gossip among themselves that migration was not their ultimate choice. The idea was implemented by the joint efforts of block officials who hope that at least the locals will think twice before locking their doors.

The Block Development Officer of Madanpur Rampur, Rumana Jafri said five houses will be advertised in every panchayat. “The block comes under the “push factor” where workers are forced to leave the native place owing to basic amenities. There is a lack of communication among people who live on forested land,” she said.

Besides advertising on the walls the administration sensitises the people by holding gram sabhas in the region. With a poster of no migration and availability of jobs locally we spread awareness among the villagers not to move to other states for livelihood. We have also staged many plays on the issue of migration, the BDO added.

Hundreds of migrant workers go out without registering their names in the labour office. Some go through unregistered labour agents and some on their own. It is tough to stop migration because workers are lured by the agents and they ultimately come back after being tortured by the owners, said an official on the condition of anonymity.

The government implemented schemes like National Rural Employment Guarantee Act, which ensures 200 days of works in a year in the rural pockets but on ground zero, they don’t get any job. That is the basic reason people migrate, said Dilip Kumar Das, Director of the NGO Antodaya. Some die and some lose their limbs while working in the states like Tamil Nadu, Kerala, and Maharashtra, Das added.

He further said that there have been many incidents where migrants’ relatives have had to face problems in bringing back their dead body and have had to request the local district administration for help. Cases are filed with Human Rights Commission or in the local police stations, who in turn contact the other state’s police. The body is then handed over to the deceased family members after a lot of formalities. In some cases, poor workers are held captive by the “labour agents”, who ask the migrants to return the advance money taken from them. If migration has to check then the government needs to provide all the facilities to the poor people like ensuring employment, roads and communication, electricity, drinking water, health and education along with bridges over many rivers. There are hundreds of villages that are still cut off from the mainstream, Das added.

Jafri said this new initiative may not curb migration totally but it will at least help in taking care of the woes of the migrants.