Bhubaneswar:  It was a dream come true for internet singing sensation, Namita Meleka, when she recorded her first devotional song for a music video on Sunday.

Impressed with the melodious voice of this tribal girl from Chintaguda village in Odisha’s Koraput district, Ollywood actress Varsha Priyadarshini had volunteered to help her realise her dreams. Keeping with her words, she took to Twitter informing about the good news.

FINALLY little sister NAMITA'S dream has come true…. MUCH THANKS TO OUR DEARMOST MEDIA BROTHERS & SISTERS TO EXPLORE HER TALENT & BRING IT TO EVERYBODY'S KNOWLEDGE 🙏🏻🙏🏻🙏🏻🙏🏻🙏🏻
ODISHA has the best of talents…. I got to know about Namita from PPL News page , I convey my pic.twitter.com/XSg1z69Kaj

The four and a half minutes long devotional song on Lord Jagannath has been penned by well-known lyricist Bijay Malla. The song ‘Ninunna, Jiuti Jeevan’ has been written in both Kui and Odia and composed by music director, Prem Anand. 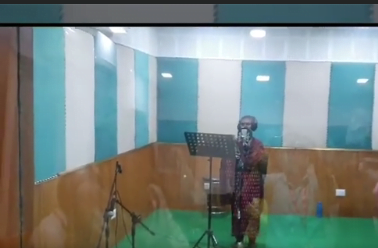 Anand informed that the music video will be released soon on Varsha’s YouTube channel.

Namita had become an internet sensation after a video of her singing Hindi song ‘Chunar’ from Bollywood movie ‘ABCD 2’ went viral on social media.

Amitabh Bachchan Asks If Scientists Have Found A ‘Bone Of Contention’

Koraput Gears Up For Emergency Situation After Heavy Rain…