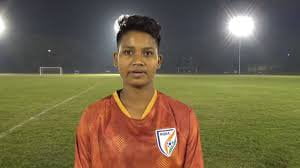 Bhubaneswar: Jabamani Tudu, a talented defender from Odisha, was inducted in the 20-member national women’s team for the South Asian Games in Nepal from December 1.

In 2015, Tudu represented India at the AFC under-16 qualifiers. She was also selected for the 2016 SAFF Women’s Championship and played her first match in the semi-final against Nepal on January 2, 2017. She had come as a substitute for Dalima Chhibber in the match that India won 3-1.

The final match will be played between the group winner and the runner-up on December 10.