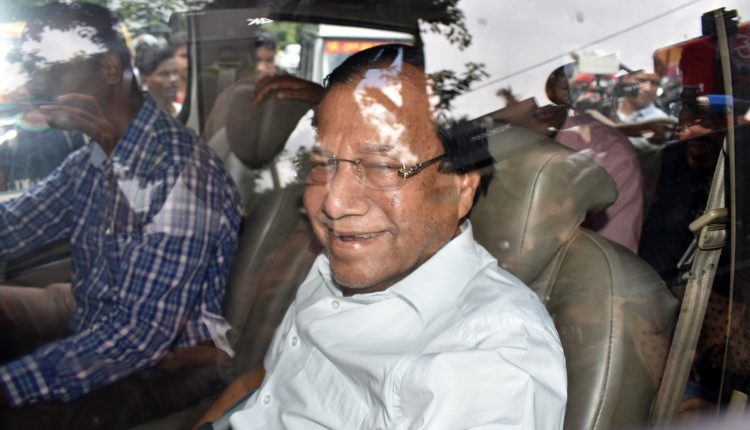 The controversial former sports administrator of Odisha, Ashirbad Behera, is finally out on bail in the Artha Tatwa (AT) group chit fund scam, triggering speculation on his future role in Odisha sports. Will he continue to pull the strings from behind the scenes? Or, will he stay away from it all? As sports circles discuss about him and his possible plans, here we take a look at the controversies he has courted and contributions he has made in his decades-long chequered career:

A former football player, Ashirbad has ruled Odisha’s premier sporting complex like no one else. He has been calling the shots for decades, directly or through proxy, getting embroiled in controversies especially during the past decade. He is also credited for developing quality infrastructure at Odisha’s premier stadium, building the OCA Club and supporting scores of budding sportspersons and sports organisers.

He ruled the roost in state’s cricket administration for 16 long years before his forced exit in 2016 following Justice Lodha Committee’s recommendation of limiting the age of cricket association office bearers to 70 years.

His tenure as general secretary of Odisha Olympic Association (OOA) was even longer. He occupied the post for 28 years, and had to step down following a direction from the Supreme Court in March 2016.

His sway over OCA, however, remains with his younger son Sanjay Behera, who earlier served as secretary of Football Association of Odisha, helming the affairs as the newly-elected secretary.

On September 19, 2019, the Central Bureau of Investigation (CBI) arrested him in connection with his alleged involvement in the state’s multi-crore chit fund scam. The arrest came nine days ahead of the OCA elections, which his son won. The CBI sleuths interrogated the 74-year-old both in 2014 and 2016 in this connection, but not arrested him then.

It was in 2017 that the CBI registered a case against Ashirbad after raiding his residence and the OCA office.

The allegation: OCA received Rs 1 crore from the AT Group to sponsor the Odisha Ranji cricket team and also towards title sponsorship of Odisha Premier League (OPL) in 2011.

The supplementary chargesheet of CBI said OCA promoted the AT Group as part of a criminal conspiracy to raise the company’s credibility in the eyes of the masses so that more and more people would invest in its schemes.

Ashirbad, however, claimed that the Rs 1 crore was spent “in a transparent manner” – Rs 75 lakh for hiring Australian cricketer Michael Bevan as coach of the Odisha Ranji team and the rest Rs 25 lakh in organizing OPL.

Leasing out land inside Barabati Stadium to a private firm for construction of a wedding hall – Barabati Palace – and renting it out proved to be nemesis of sorts for the ousted general secretary of OOA.

Twenty-three shops and the wedding hall came up on an encroached 0.705 acre. It was adjacent to 20.808 acre, which the state government leased out to the association in 1949 for construction of Barabati Stadium.

In its defence, the association claimed it had leased out the place for financial benefit.

In 2014, the Orissa High Court directed the state Crime Branch to investigate the affairs of the association. Ashribad challenged the decision in the Supreme Court and got an interim stay order in January 2015. Three months later, the apex court, however, held the association guilty of encroaching and also ordered the Cuttack district administration to take possession of the property.

Following SC’s direction, the accountant general of Odisha also made an assessment of the accounts of Barabati Palace and the report indicated alleged fiscal impropriety by OOA. The state government intensified the controversy by alleging in the apex court that the arrangement was so made with the sole purpose of benefiting M/s INCON Associates, which had Ashirbad’s elder son and son-in-law as partners. The firm constructed Barabati Palace.

In June 2017, CBI registered a case against him and raided the Olympic association’s offices and his residence in connection with the alleged financial irregularities and the land-grab case. In December that year, the Enforcement Directorate (ED) charged Ashirbad under the Prevention of Money-Laundering Act, 2002, for encroaching u[on prime government land and using it for his personal business interests. His elder son was also an accused in the case as his firm built a wedding hall and ran several business units on the encroached land.

When the SC accepted the Justice Lodha Committee’s recommendation on reforming Indian cricket administration, which included office bearers to be under 70 years and not hold a position for longer than three terms, the OCA annual general body meeting decided not to hold elections and attributed it to the Board of Control for Cricket in India’s (BCCI) decision to file a review petition on the July 2016 order.

The associations were asked to hold elections within a year.

Since OCA was the original petitioner against the Lodha Committee report and an affiliate of BCCI, Ashribad had told ET that it would wait for the review petition to be heard. “If a person above 70 years can become a member of parliament, a minister, the prime minister and even president of the country, why apply different yardsticks to cricket associations? The fundamental right should be the same for everyone,” he had added.

It was in January 2017 that he along with OCA president Ranjib Biswal and 173 officials stepped down from their respective posts, adhering to the recommendations of the Supreme Court-appointed Lodha Committee. The Supreme Court’s call for good and transparent governance in BCCI, however, fell flat as this influential family ensured it continued to remain in position of power. Ashirbad voted from jail for his son Sanjay, who won the secretary’s post.

Ashirbad was also under the CBI’s scanner in a case pertaining to OCA allowing 36 junior cricketers whose birth certificates were forged to facilitate their participation in under-19 cricket matches.

Ashirbad found himself in an unsavoury situation when his 35-year-old daughter, Bharati Behera, filed a case against him in the Mahila police station in 2010. She alleged she was married against her wishes and was forced to stay in a short stay home on the Tankapani (???).

Bharati had married a bank manager in Jagatsinghpur and was allegedly tortured by her in-laws for dowry. When she complained about it to her father, he and her brother allegedly put her in the short stay. After fleeing the home, she lodged a police complaint, alleging the owner of the short stay home confined her to a room for over three months against her wishes.

Police registered three cases against her father, brother, husband and her in-laws, besides caretaker of the short stay home under sections 498 (A) (torture), 506 (criminal intimidation), 342 (wrongful confinement), 344 (wrongful confinement for ten or more days), 323 (voluntarily causing hurt), 294 (obscene acts and songs) and 34 (acts done by several persons in furtherance of common intention) of the IPC.

Artificially Hatched Eggs Anyone? Call This Young Odisha Entrepreneur Who Will Give You Dozens Of Them