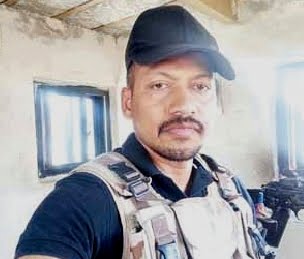 Kendrapada: An Odia jawan, who was in charge of the Indian Embassy in Kabul, has narrated his harrowing experience after returning to his native village Naladia Sasan village in Kendrapada district.

Talking to the media, Dipak Choudhury, the ITBP Commando, said that he was sent as the incharge of security at the Indian Embassy at Kandahar in February this year. But as the Taliban forces gradually took control, the Government of India decided to close the embassy in July and bring back seven embassy officials and other staff.

“Acting on the directive of the government, I along with my 45 colleagues decided to leave the Embassy with officials and staff in the wee hours of August 9. All of us were in a state of panic as a heavy exchange of fire was going on around the Embassy. However, braving all odds, we managed to reach the Kandahar airport. We had to stay at the airport on August 9 and finally left at 11 am on the next day in a C-17 aircraft of the Indian Air Force,” Dipak said.

He described how all of them had to starve during their great escape from 6 am on August 9 till the evening of August 10.

“All of us had lost hope of our lives while we were on the way to the airport as we found heavily-armed Talibans patrolling the city. They detained us on the say but allowed us to proceed. We are relieved after reaching our motherland,” Dipak added.

Heaving a sigh of relief and emotionally charged Dipak’s father Trilochan and mother Manjulata said their son’s safe return was made possible with the grace of God.

All Weather Models Track Cyclone Jawad Landfall To Puri On…