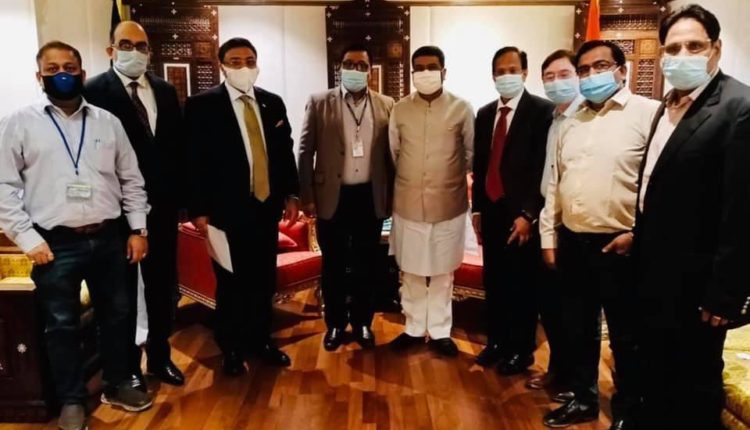 Kuwait: The Kuwait Odia Association on Monday met Union Minister Dharmendra Pradhan, which is in the city to offer condolences to the leadership of the Gulf nation on the passing away of its former Amir Sheikh Sabah Al-Ahmed Al-Jaber Al-Sabah.

According to sources, the delegation was led by senior Petro Physicist at Kuwait Oil Company and the president of the association Girija Shankar Padhi. He was accompanied by other senior members of the community like Girijanandan Panda, senior contracts engineer with Kuwait Oil Company, Umesh Panda, project manager at Bader Al Mulla, Tushar Mishra, business development manager at Warba National Group, Rakesh Raut, architect and Sunil Panigrahi, IT manager at Agility.

They meet the Union Minister in presence of Indian ambassador to Kuwait, Sibi George, and Joint Secretary (Gulf), MEA, Vipul.

Dharmendra also inquired about the average salaries of the Odia labourers working in Kuwait and treatment meted out to them by their local employers. He invited the Odia businessmen and entrepreneurs living in Kuwait to invest in Odisha by setting up plastic manufacturing companies in Paradip and in local petrochemical companies and assured all necessary support from the Indian government.

Puri Gajapati Appeals To Odias Around World For Development…