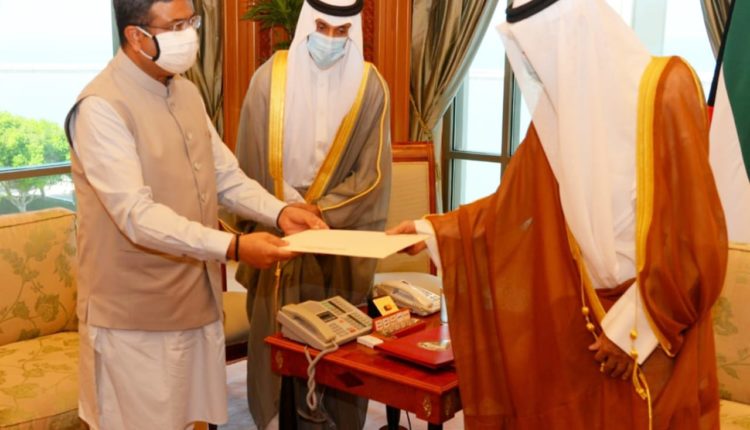 The minister, on a two-day visit to Kuwait, said that India saw the west Asian country as an important and trusted partner in achieving energy security.

The Union minister handed over letters from Indian President Ram Nath Kovind and Prime Minister Narendra Modi to the new leadership of Kuwait.

“On behalf of Govt of India, PM Shri @narendramodi and the people of India, expressed sincere condolences to the Al-Sabah family, the Kuwait Govt. and its people, on the sad demise of HH Sheikh Sabah Al-Ahmed Al-Jaber Al-Sabah, Late Emir of the State of Kuwait. HH Late Emir known as the ‘Dean of Arab Diplomacy’ for his vast diplomatic experience contributed immensely to regional peace, security & stability. A humanitarian leader, HH was instrumental in strengthening our bilateral ties, and always cared for the Indian community in Kuwait,” Pradhan said.

“A proponent of peace and a statesman par-excellence, HH Late Emir’s friendship and his commitment towards a strong bilateral relationship between our two great countries was always cherished by India and its people. His Highness Sheikh Nawaf Al-Ahmed Al-Jaber Al-Sabah, the Emir of Kuwait thanked the Hon. @rashtrapatibhvn, Hon. PM @narendramodi and the people of India for their condolences. He stated that India Kuwait relations are historic and will continue to progress for mutual benefit,” the minister said.

Man Run Over By Ambulance Near Bhubaneswar

Rhea Chakraborty Files Complaint Against Neighbour For ‘Bogus Allegations’ Against Her