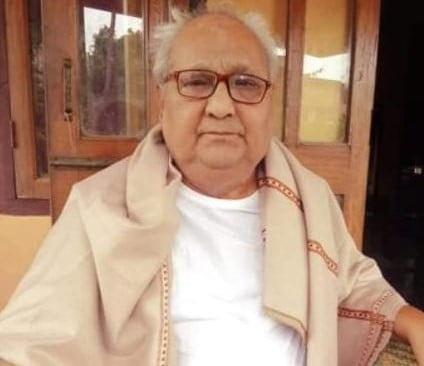 Bhubaneswar: Professor Deepak Sarangi (85), well-known historian, soft-spoken and student-friendly academic, a firebrand student leader during his college days from Mayurbhanj district is no more. For his students, fans and followers, this vacuum will never be filled again, perhaps by none.

A stalwart in higher education and research in history and archaeology, in the tribal heartland of Mayurbhanj, he originally belonged to the Odia-speaking region of Jharkhand, which during the pre-Independence era was politically mingled with the-then Bihar. He was the second son of Tarapada Sarangi, freedom fighter and a prominent leader of “Odia Bhasa Andolon” in the Singhbhum region.

Born on September 5, 1937, in Gandanata village near Bahadagoda of the erstwhile Bihar province, Deepak Sarangi finished Matriculation from the nearby Khandamouda High School, Intermediate in science from GM College, Sambalpur, BA from MPC College, Baripada and MA in History from the most prestigious college at the time in Odisha, Ravenshaw College, Cuttack.

As the adage goes, ‘Morning shows the day’, his oratory skills were noted from his college days. He became the student union president in MPC College, Baripada, twice in Ravenshaw College in 1956 and 1957. During his college days, Deepak Sarangi won the Chancellor Cup as he was a fantastic debater.

He was also secretary of the Utkal University Chapter of World University Service, vice-president of Odisha History Congress, Senate and Syndicate members of Utkal and North Odisha University (now Sriram Chandra Bhanja Deo University). He was also the chairman of the committee formed by the Odisha Government on issues of the outlined Odia tract of Saraikela-Kharsuan.

Though he was a boarder at the West Hostel during his college days in Ravenshaw, he was the Assistant Superintendent of the East Hostel from 1971-73. The East Hostel is celebrating its Centenary this year, most probably on December 24.

An eloquent speaker throughout his life, Deepak Sir, as he was fondly called by all his students in Baripada, where he spent his life and worked as a prominent faculty in the Department of History and later became the Principal of MPC College Baripada for more than six years. Though he started his career at MPC in 1958, later he taught history and archaeology at Ravenshaw College, Rajendra College, Balangir and FM College Balasore.

Apart from his contribution as a noted historian of Odisha (he also happens to be the son-in-law of noted historian and archaeologist of Odisha and Mayurbhanj Professor KC Panigrahi), Deepak Sarangi was also with the ‘Seema Andolan’ at Saraikela-Kharsuan and was jailed for more than a month. The leadership quality inherited from his father was perhaps there to drive him till the end as he was associated with several organisations on Odisha’s history, literature and Odia identity.

Deepak Sir died at a private nursing home in Baripada at around 9.10 am in the morning on Thursday. His last rites were performed at Baripada’s Baruni Ghat. His ever-smiling face, approach to students, colleagues and staff members of MPC College, Baripada will always remain alive as his memories will never be erased from public memory.

Perhaps, Deepak Sir’s demise will disapprove the fact that public memory is short, for, this erudite scholar and student-friendly soul, came, ruled and will stay in the hearts of millions of his students, though his mortal body is gone.

We all know, sir you will bless us from heaven like a bright star and guide your students for the betterment of Mayurbhanj, the land you loved so dearly. Professor Deepak Sarangi will also be remembered by thousands of Odia people in the region of Saraikela-Kharsuan, as his family is spearheading the language struggle for the Odia people there.