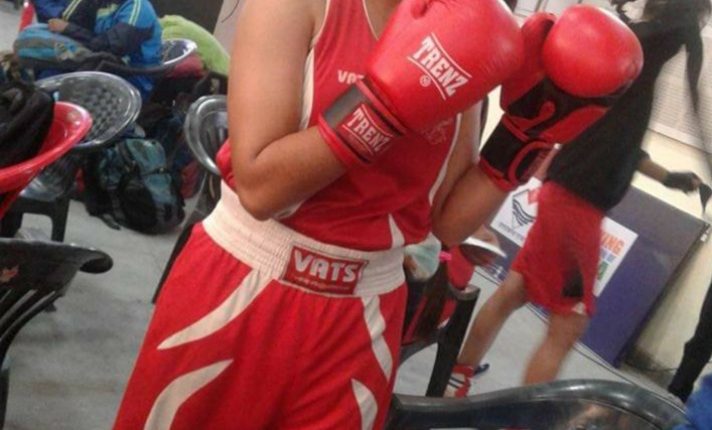 Berhampur: The OIC of Gurandi police station, Mamata Panda, has been in the news recently for her dubious link to the death case of Assistant Conservator of Forests (ACF) of Paralakhemundi Soumya Ranjan Mohapatra in Gajapati district.

However, not many may know that Mamata is a former national-level boxer. In fact, she is the first Odia woman boxer to represent India at an international championship. The event was held in Pyongyang in North Korea from July 18-25, 2005. Mamata was only 24 years old then.

According to the Odisha Amateur Boxing Association, Mamata was selected for the 46-kg category as part of an 11-member team of women boxers.

Mamata was born in a poor family comprising four sisters and a brother. Her father, Keshaba Panda, was a former weightlifter and worked as a peon in a government department in Berhampur. Her mother, Mamini, was a homemaker.

Mamata’s passion for boxing and a struggle to make a career in the sport started when the family was residing in a two-room government quarter at PWD Colony Bijipur in Berhampur.

Her boxing career began on a disappointing note though. She was not selected in the Odisha boxing team and instead represented Madhya Pradesh.

The same year, she again won a silver medal in the 2nd Senior National Boxing Championship in New Delhi.

She also grabbed a bronze medal in the 31st National Games (2000-01) in Patiala and another bronze at the 3rd Senior Women National Boxing Championship held in Aizawl in 2003.

In 2004, she secured the 1st place in the 3rd All Orissa Women Boxing Championship.

Among other championships, she also participated in the 4th and 5th Senior Women National Boxing Championship held in Kokrajhar (Assam) and Kolam (Kerala).

Besides boxing, Mamata also excelled in various sports such as powerlifting, basketball, kho-kho and athletics and has won several medals.

Mamata snatched the gold medal in the 52-kg category in a power lifting championship held in Ganjam district in July 2002.

Mamata was appointed as a constable with Odisha Police under the sports quota on July 4, 2004.

Things took a turn for the worse in 2015. Her first husband, Neelamadhab Das, died allegedly because of excess intake of medicines on November 19 that year. Heartbroken, Mamata tried to commit suicide by jumping into a well near her parental home at Bijipur in Berhampur.

Mamata was posted as a Sub-Inspector at Adaba police station in Gajapati district at that time.

She was rescued and admitted to MKCG Hospital. She was later shifted to Apollo Hospitals in Visakhapatnam.

Mamata married for the second time a few months ago.