Odisha Assembly Adjourned Amid Oppn Uproar Over Non-Procurement Of Paddy 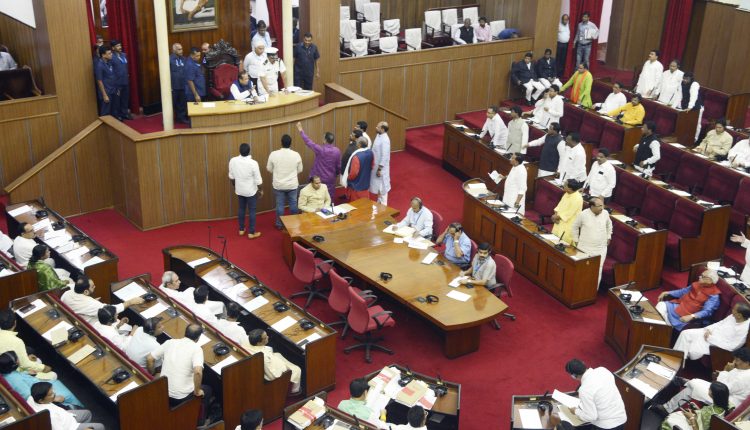 Bhubaneswar: The Odisha Assembly on Monday was adjourned till 11.30 am following uproar by the Opposition BJP and Congress members over non-procurement of paddy at several mandis.

As soon as the House session began, Speaker Surjya Narayan Patro ordered the question-hour session while rejecting the adjournment motion notice of the BJP on non-procurement of paddy in the state.

Protesting against the decision of the Speaker, the irate BJP members led by the opposition whip Mohan Majhi rushed to the well of the House and demanded a discussion on the adjournment notice.

Later, the Congress members joined the protest on this issue.

Unable to run the proceedings, the Speaker adjourned the House till 11.30 am.

“Due to the wrong token policy, the millers are yet to procure paddy of the farmers from the mandis at several places in Odisha. In this connection, we had given the adjournment notice to the Speaker for a discussion on this matter. But he summarily rejected our demand,” Majhi said.

Congress member Tara Prasad Bahinipati said though the district collectors have ordered immediate registration of the farmers for procurement of their paddy, no step has been taken till date. As a result, thousands of quintals of paddy have been kept outside the mandis. Under such circumstances, the farmers have threatened to commit suicide. “Though the minister concerned has given a statement on this issue in the Assembly, the state government has not taken any step,” he rued.

Konark Express Delayed By Over 7 Hours