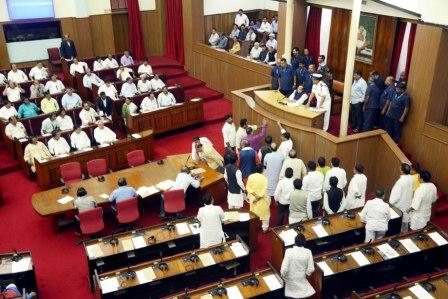 Bhubaneswar: The Odisha Assembly was adjourned on Thursday following an uproar by Congress and BJP members. The Opposition MLAs demanded a discussion on the death of Haridaspur PEO Smitarani Biswal.

As soon as the House session began, Speaker Surya Narayan Patro announced the question-hour session. This triggered protests by Congress and BJP members. They raised anti-government slogans, rushed to the well of the House and urged the Speaker to cancel the question hour and order a discussion on Smitarani’s death.

Unable to run the proceedings, the Speaker adjourned the house till 12 pm.

Power Cut At These Places In Cuttack & Bhubaneswar Tomorrow