Odisha Assembly Adjourned Till Tomorrow Due To Oppn Uproar 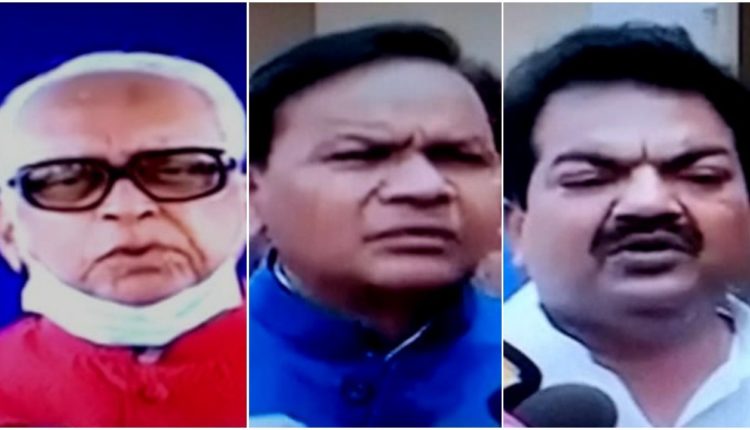 Bhubaneswar: Odisha Assembly Speaker Surjya Narayan Patro adjourned the House till 10.30 am on Thursday due to the uproar by the Opposition BJP and Congress members.

As soon as the budget session of Assembly began today with the inaugural address by Governor Ganeshi Lal, BJP and Congress members staged a walkout saying that there was no mention by the Governor about any of the prevailing major issues in the state.

Again after the inaugural address, the House witnessed uproarious scenes during the motion of thanks. The BJP members rushed to the well of the House and raised slogans on gross irregularities in procurement of paddy at several mandis in the state.

Unable to conduct the proceedings, the Speaker adjourned the Assembly till tomorrow.

Talking to mediapersons later, leader of the Opposition Pradipta Nayak said that the Governor did not mention about the problems faced by the farmers in selling their paddy at the mandis (procurement centres) in the state. “While the farmers are waiting at the mandis for several days, the state government says that it will procure the paddy if the Centre will release Rs 2000 crore,” he added.

Leader of the Congress Legislature Party Narasingha Mishra said the sensitive issues like the Kotia issue and the farmers’ problem did not find place in the Governor’s address.

“While the Andhra Pradesh government forcibly occupied the Kotia panchayat and conducted the panchayat polls in three villages, the Odisha government remained a mute spectator. Apart from this, the farmers of Odisha are now left in the lurch as the government is not procuring their paddy. While the farmers are not provided with the token to sell their paddy, the token provided to some farmers has lapsed as their paddy was not procured in the specified time frame due to the gross mismanagement in the mandis,” Mishra said.

In his reaction, BJD member Umakant Samantray said that the issues raised by the Opposition members will be discussed in the Assembly.

Rain Forecast For Odisha Till Tomorrow; Thunderstorm Warning For 14 Districts

Odisha Assembly Adjourned Sine Die One Day Before End Of…