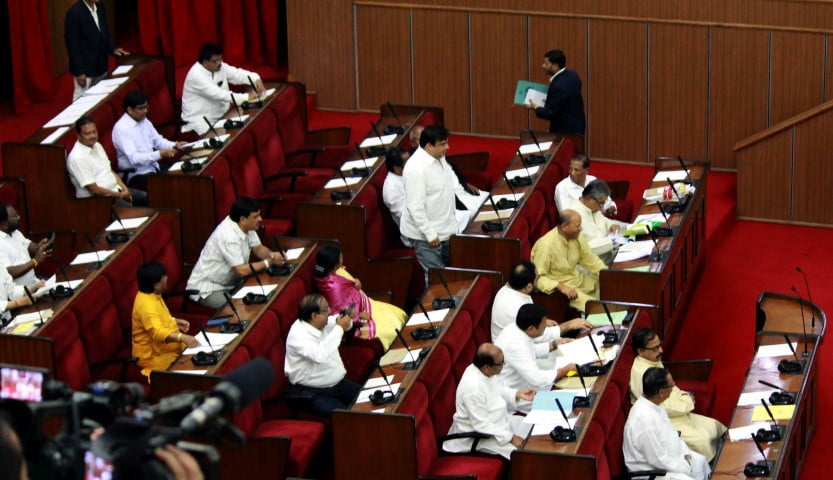 Bhubaneswar: The resolution for the formation of Vidhan Parishad (Legislative Council) was passed in the Odisha Assembly on Thursday in the absence of the Opposition Congress and BJP members who staged a walkout in the House in protest.

All 104 BJD members including Chief Minister Naveen Patnaik present in the House cast their votes in favour of the Vidhan Parishad.

Presenting the resolution, Parliamentary Affairs Minister Bikram Keshari Arukh, said Article 169 of the Constitution of India provides for the establishment of the Vidhan Parishad.

“According to the Constitutional provision, of the total number of MLAs in the State Assembly (147), the Vidhan Parishad will have one-third members (49) of whom one-third of the members (16) will be elected by members of local bodies such as Municipalities, Gram Sabhas/Gram Panchayats, Panchayat Samitis and Zila Parishads and one-third of the members (16), who are not members of the Legislative Assembly, will be elected by members of the Legislative Assembly, one-twelfth (4) members will be elected by persons who are graduates of three years’ standing residing in the state, one-twelfth (4) members will be elected by persons engaged in teaching in colleges and universities for at least three years, while the remaining one-sixth (9) members having knowledge or practical experience in fields such as literature, science, arts, the co-operative movement and social service will be nominated by the Governor,” the minister added.

He also said that in line with the Rajya Sabha, each member of the Vidhan Parishad will have a six-year term while one-third of the Council’s membership will expire every two years.

The minister further informed that after the resolution is passed in the State Assembly, it will be referred to the Centre where the Union Cabinet will give an in-principle approval. A law would come into force for setting up of the Vidhan Parishad after the approved resolution of the Union Cabinet is passed in both houses of Parliament followed by the Presidential assent.

“Odisha has picked up the growth momentum. For this, wider consultations will be required and the Legislative Council will be a great help,” the Chief Minister told mediapersons later.

The state government plans to carry out Vidhan Parishad procedures from the Old Assembly Building while the existing Assembly Secretariat will cater to its administrative needs.

The state government will spend about Rs 35 crore for setting up the Vidhan Parishad, he added.

The Chief Minister had formed a five-member special committee headed by Commerce and Transport Minister Nrusingha Sahu with Manohar Randhari (BJD), Pramila Mallik (BJD), Bhujabal Majhi (Congress) and Nitish Gangadeb (BJP) as members to visit the states having a Legislative Council and study their mode of functioning.

Bhubaneswar Art Trail: Mission To Re-Discover The Sights, Sounds And Smell Of The City