BhubaneswarOdisha
By OB Bureau On Dec 1, 2021 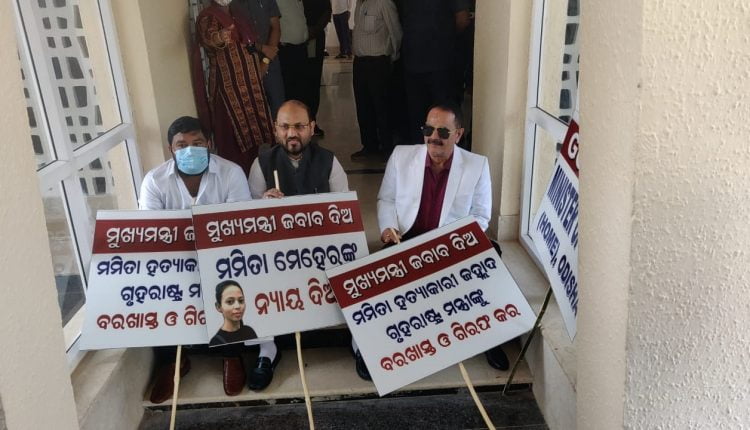 Bhubaneswar: The Winter Session of Odisha Assembly began on a stormy note today as Congress legislators staged a dharna at the entrance to prevent Minister of State for Home Dibya Shankar Mishra from entering the House.

Before House proceedings started, opposition Congress MLAs Taraprasad Bahinipati, Mohammed Moquim, Santosh Singh Saluja, Suresh Routray and others staged protest at the entrance of the Assembly in a bid to prevent the minister from entering the House.

Shouting slogans and holding “Go back MoS (Home)” and “Give Justice to Mamita Meher” placards, the legislators demanded an answer from Chief Minister Naveen Patnaik over the issue.

“We had strongly demanded the dismissal of Dibya Shankar Mishra for his alleged links with Govind Sahu, the prime accused in the Mamita murder case. The deceased’s father has even alleged that the minister used to visit the school and spend nights there. However, no action has been taken against him. The CM has remained silent over the issue,” Saluja said.

The Congress MLAs also locked another gate to ensure the minister cannot enter the House. However, Assembly secretariat staff later broke the lock.

“We are opposed to MoS Home’s entry into the August House. We will not allow the tainted minister to impure the sanctity of the sacred House,” Bahinipati told reporters.

Other MLAs and ministers, however, faced no obstruction and smoothly entered the House.

Till the House paid obituary reference to former members and slain COVID-19 warriors, Mishra was not seen in the House. The protesting MLAs later withdrew the dharna and participated in the House proceedings.

The House was later adjourned till 5 pm after obituary reference to the departed leaders.

A day before the commencement of the Winter Session, the Orissa High Court on Tuesday nominated ABS Naidu, a former district judge, to monitor the investigation in the Mamita murder case.

This followed a request by the state government to nominate a sitting or retired Judge of the HC or a District and Sessions Judge to monitor the investigation.

But the move is being seen as an attempt by the government to quell the opposition demand for the resignation of MoS (Home).

The Winter Session commenced here with strict adherence to COVID-19 protocols and will continue till December 31.

The first supplementary budget of the current financial year will be tabled by Finance Minister Niranjan Pujari. Official business will be transacted from December 2 to 6 while private members’ business (bills and resolutions) will be tabled on December 3.

Discussion on demand for grants for the first supplementary statement of expenditure for 2021-22 will be held from December 7, followed by discussion and approval of the Appropriation Bill.