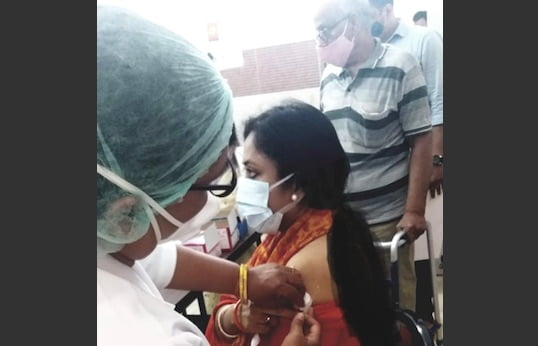 Lekhasri exhorted people to get themselves vaccinated after taking the first Covaxin jab on Saturday. “I took the first dose of ‘Modi Tika’ for complete eradication of COVID-19,” she wrote on her official Facebook handle on Saturday.

Dubbing her as ‘bhakta’, social media users trolled her for trivialising the efforts put in by our scientists to come up with a vaccine for the deadly virus in record time.

“Madam, delete this post… it’s not modi tika… it’s the effort of our scientists who have discovered this vaccine..yes credit also given to our pm for support.”

“What do you mean by ‘Modi Tika’. I am also a fan of PM Modi. But that doesn’t mean you will do this much bootlicking. Actually you people have left no difference between Congress and BJP. Voters are not sleeping, Madam. Stop this.”

“So shameless statement, what message u r giving to the general public. U should apologize to everyone. The vaccine has been developed by our great scientists, who have worked day and night, pls don’t do politics, u don’t deserve to give this statement. Very shameful statement. Leaders like u spoiling the name of Odisha.”

Tagging Prime Minister Narendra Modi, Lekhasri and Odisha BJP, social activist Jayant Kumar Das asked whether any vaccine by this name was available and demanded disciplinary action against her.

Will U please tell if any such #CovidVaccine is available in UR name? If no then take Disciplinary Action against her for spreading rumorshttps://t.co/xWbqxPZGHb pic.twitter.com/hSGdEWNO6u

When contacted, Lekhasri justified her post saying that the vaccine was possible because of the efforts of PM Modi and the ICMR. “We have always had doctors and scientists but lacked the right leadership and political will. PM Modi deserves every accolade for providing the inspiration and motivation,” she said.

She further said that it was PM Modi’s vision that saw the vaccine being well distributed and reaching all people in a phase-wise manner. “I am very proud of our ‘Made In India’ vaccine which is also being exported to help other countries. People will call me ‘bhakt’ and criticise me, but I am undeterred by the comments as these are political in nature,” she said.

She said that the Odisha government has long been fooling people of the state by claiming credit for the Re 1/kg rice being provided under National Food Security Scheme by calling it ‘Naveen Chawla’.

“There is nothing wrong with what I have posted. What PM Modi is doing for the country needs to be told again and again. It is because of him that we have got the respect we deserve in the world,” she added.