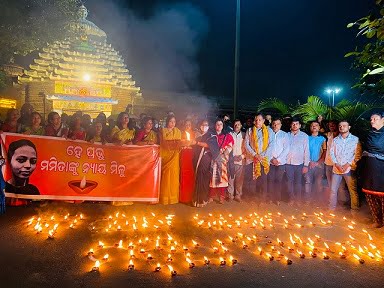 Bhubaneswar: The BJP Mahila Morcha on Wednesday organised a mass lighting of lamps in memory of slain school teachers Mamita Meher on eve of Diwali in the city.

The members of the Mahila Morcha gathered in frontof Lingaraj Temple, here in the evening and lighted the earthen lamps. They prayed for the soul of Mamita to rest in peace and justice for her family.

They said it is a matter of regret and disgrace for the state that even 25 days after the school teacher was killed in a heinous manner in Kalahandi district, her family is yet to get justice. However, the BJP will continue to fight till the truth is revealed, they added in a release.

It may be noted that Odisha president of BJP Samir Mohanty on Tuesday appealed to the people of the state to light a lamp in memory of Mamita on Diwali.

T20 World Cup: India Thrash Afghanistan, But Is It Too Little Too Late?