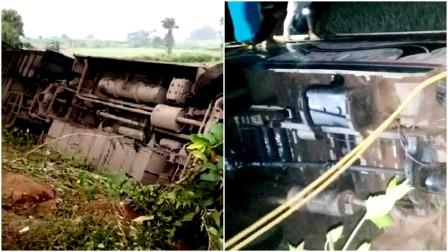 Dhenkanal/Berhampur: Two bus accidents in Odisha has left one person dead and 50 injured in the past 24 hours.

In Ganjam district, one passenger was killed and 15 injured after a private minibus ‘Darpa’ overturned near Gangapur on Wednesday night. The minibus was going from Borigaon to Tanarada at that time.

The deceased was identified as Gobardhan Jena. The injured passengers were taken to a government hospital in Aska. Some of them were later shifted to MKCG Medical College and Hospital in Berhampur.

In the other incident, 35 passengers were injured after a Bhubaneswar-bound private bus ‘Pramoda’ overturned at Pada Chhak near Hindol area in Dhenkanal district on Thursday morning. The bus was coming from Sambalpur.

Five of those injured are in critical condition and undergoing treatment at SCB Medical College and Hospital in Cuttack. The others were discharged after first-aid at the community health centre (CHC) at Khajuriakata.

Project On Conservation Of Indian Giant Squirrel Launched In…