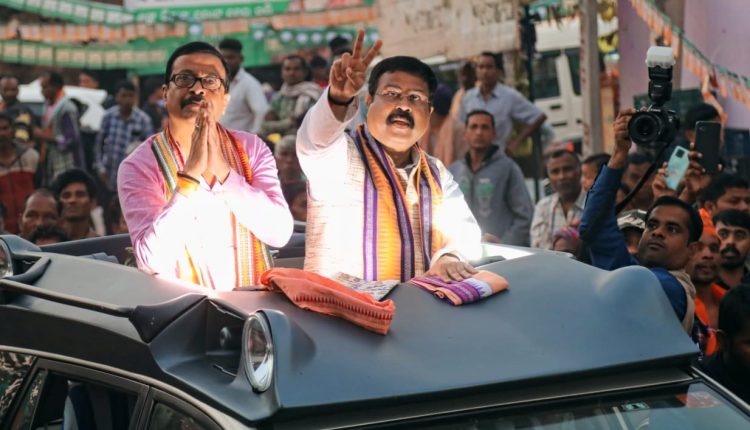 Padampur: Stepping up the attack on Naveen Patnaik government in Odisha ahead of Padampur Assembly bypoll, senior BJP lader and Union Education Minister Dharmendra Pradhan on Wednesday alleged that the state is hijacking the Central schemes and misleading the people.

Addressing a series of meetings to campaign for BJP candidate Pradip Purohit, Dharmendra claimed that the BJD government is hijacking Central schemes as it is tired and unable to launch new good schemes for the development for the state and welfare of people.

Accusing the Naveen government of having failed to provide basic facilities to the people, he said BJD is trying to win the election with false promises, but the people will give a befitting reply to the ruling party for its failure during the last 22 years.

Accusing the state government of lying on the issue of drinking water supply to every village, Dharmendra said women of Bargarh district still have to travel long distances to fetch water from rivers and ponds.

The Centre provides an interest waiver between seven per cent to 11 per cent to women SHGs, while the State gives only 4 per cent. The Chief Minister should honestly answer what he has done for empowering women in the last 22 years of his government.

Dharmendra has been campaigning in Padampur Assembly constituency in Bargarh district since Tuesday to seek votes for Purohit for the December 5 by-election. He will also address several election meetings and hold roadshows on Thursday.