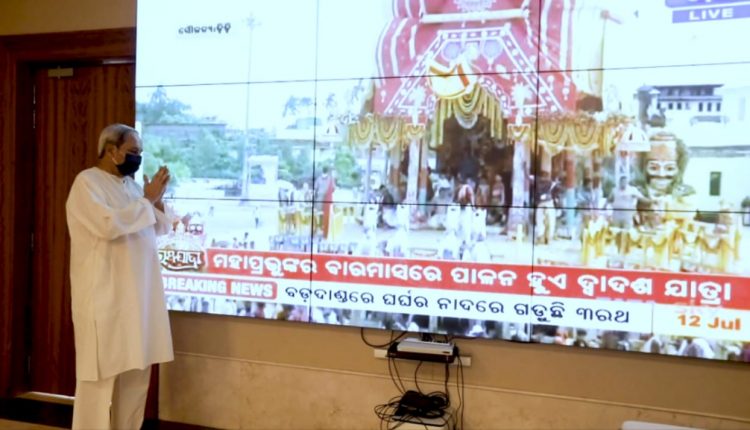 Bhubaneswar: An ardent devotee of Lord Jagannath, Chief Minister Naveen Patnaik watched the live telecast of Rath Yatra from Puri on television at his residence in the Odisha capital on Monday.

The CM can be seen in the video offering prayers to Lord Jagannath with folded hands as Nandigosha began to roll on Bada Danda.

He had earlier greeted people of the state and sought the blessings of the sibling deities to tide over the COVID pandemic.

The pulling of the chariot began at 12.15 pm, almost three hours ahead of schedule, after the first servitor of the Lords, Puri Gajapati Dibyasingha Deb, performed the Chhera Panhara niti atop the chariots. It was scheduled for 3 pm.

Amid the COVID pandemic, the annual festival is being held without devotees due to restrictions on public participation for the second consecutive year. The town is under curfew till 8 pm on July 13.

Shankaracharya of Puri Govardhanpeetha Swami Nischalananda Saraswati also arrived with his disciples for darshan of the deities on the chariots.