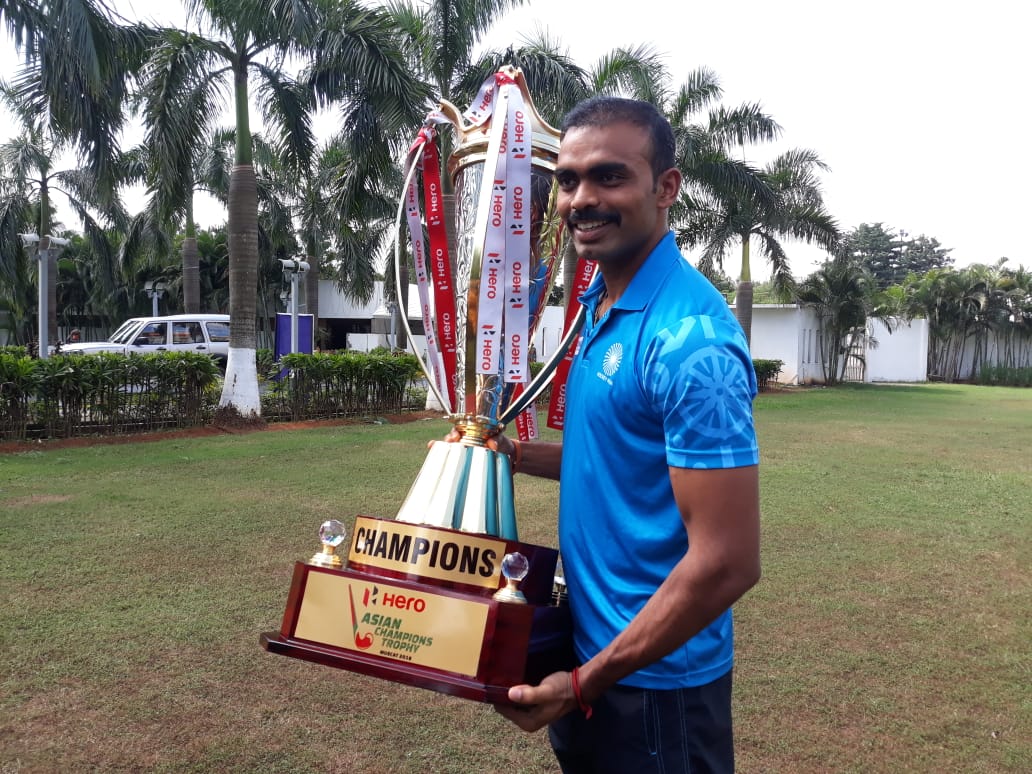 Bhubaneswar: “If people believe Hockey is the national game then we should probably go by it, because belief holds more weight than an announcement. However, official announcement will give much-needed recognition to the game,” former Hockey captain P R Sreejesh said during a media interaction here on Sunday.

The 30-year-old was adjudged the best goalkeeper at the recently concluded Asian Champions Trophy 2018, where India and Pakistan were declared joint winners. He also completed 200 matches which he said is a “great milestone but nothing very special as I have to play many more matches.”

“I have lost count. It was just another match, but of course, special because I never thought I could achieve this. Whatever I achieve, individual awards as well, they belong to my team. We are together winning a match, a trophy, or any title,” he said.

The Arjuna award winner said language was a hindrance, initially. Having come from a farmer’s family in Kerala’s Kizhakkambalam, Malayalam was the only language he could speak. Other challenges included adapting to the culture and no friends. “Besides, I also did not have the modern sporting gears because of which I used to get hurt all the time,” he said.

He started playing hockey at the age of 12 and was soon spotted by hockey coaches Jayakumar and Ramesh Kolappa. He made it to the Junior national team in 2004 and debuted in a match against Australia in Perth.

His biggest challenge was getting into the senior national team. “I was a stand by for almost two years and then in 2008, I got a chance when Baljit, the goalkeeper then, got injured. Then onwards, I have been a part of this team,” he added.

The Goals Of A Goalkeeper

He said goalkeeping involves a lot of mental preparation. “We have a different position altogether. We have no time to dwell over misses because it happens all so quickly. Other areas are goal-keeping skills, penalty corner defense, and normal game situation. Fitness is of paramount. And, how we tackle one-on-one situation is important,” he said.

“Bhubaneswar is a wonderful city and being a hockey player, I love the crowd. Even during a practice match, there are so many people cheering for us and it is an overwhelming feeling. I wish to see this everywhere, the crowd, I mean. It is a developing city and the growth is commendable. Something or the other is coming up all the time and we go out during weekends for a break and check out the cafeterias,” he said.

Puri, however, is a favorite with all the players, he added.

“Keep drinking water, a lot of them. Take care of what you eat,” he said. There are distractions so it is important to stay focused while playing the game and remember that health is more important, he added.

“If one wants to take pressure, then it is there for sure. When 20,000 people cheer for India, we can either look at it as pressure or encouragement and support. Pressure will have a negative impact while encouragement motivates us to do better,” said the optimistic player.

Dream High and Work For It

“I am from Kerala and there is no one else from that region of India in the national team. So if I could make it and get here, anyone can. People in Bhubaneswar especially, those who have all the facilities, can definitely get whatever they want. You just need to dream and work hard,” he said

Moreover, the authorities can also inculcate that passion among youngsters by letting them play in the field for free and allow them to watch matches and interact with the players, he suggested.