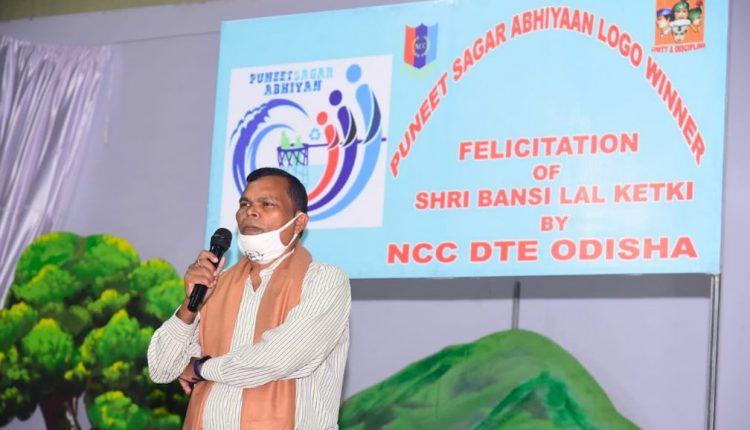 Bhubaneswar: Bansi Lal Ketki, a designer from Odisha, was felicitated by DG, the National Cadet Corps (NCC), for designing the logo of Puneet Sagar Abhiyan on the CRPF campus in Bhubaneswar. He got a cash prize of Rs 50,000.

The logo designed by him was picked from 4433 entries received during the contest, which was live from August 23 to September 10. He was declared the winner last month.

“The event was organised to felicitate the person who designed the logo. And we are lucky that somebody from Odisha got selected.” Odisha NCC DG Sumeet Bannerjee said on Friday.

Expressing happiness over his selection, Ketki said that he feels privileged. The logo designed by him describes the essence of Puneet Sagar Abhiyan, which was launched with the prime objective to clean the plastic waste along the seashores, river banks and water bodies, in a simple and effective manner.

The focus of the campaign is on recycling rather than relocating the plastic waste and to generate awareness and educate the target population about the measures for conservation and impact of plastic pollution along the sea beaches and water bodies.

So far, 3.4 lakh NCC cadets from 127 coastal area NCC units have collected approximately six tonnes of plastic waste and these will be handed over to NHAI for road construction.

Odisha Doctor Who Treated Nehru In 1964 Passes Away At 96