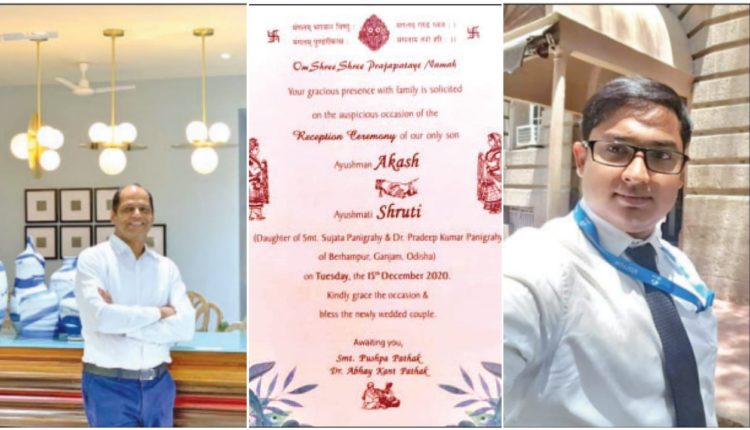 Bhubaneswar: The Vigilance sleuths recovered a wedding reception invitation card during the two-day raid on suspended IFS officer Abhay Kant Pathak, who is accused of accumulating assets disproportionate to his own sources of income.

His son, Akash Kumar Pathak, who along with Pathak was arrested on Friday, was to marry the daughter of former Odisha minister and Gopalpur MLA Pradeep Panigrahi on December 11.

The anti-graft officials had found hotel bills of more than Rs 90 lakh at Hotel Taj Mahal Palace, Mumbai, and advance booking amount of Rs 20 lakh paid at Taj Lake Palace, Udaipur Rajasthan. The later was perhaps for the wedding.

The reception was scheduled for December 15.

A lavish pre-wedding ceremony was also recently organised at a five-star hotel in Bhubaneswar.

After the arrest and suspension of Pathak, the axe fell on the BJD MLA Pradeep Panigrahi, who was expelled from the primary membership of the party on Sunday. Interestingly, he was shown the door for alleged ‘anti-people’ activities and not on ‘anti-party’ charges as the norm has been so far. If media reports are to be believed, he allegedly helped Akash in a job fraud.

The Odisha Vigilance, which has started to look into the source of the father-son duo’s opulence, is also probing the alleged fake recruitment made by Akash for Tata Motors in Ganjam’s Gopalpur area.

The anti-corruption agency had come across ‘letter of intent’ purportedly issued by Tata Motors to candidates after interviews in April. A list of 68 candidates, who had appeared for interviews and cleared, is under the scrutiny of both Vigilance as well as the Crime Branch.

Odisha MLA Pradeep Panigrahi Gets Bail, Free To Walk Out of…