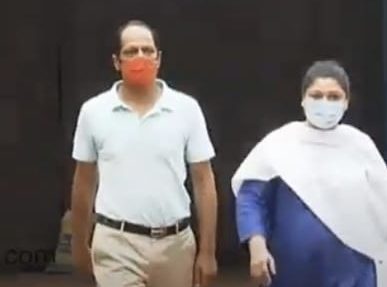 The decks were cleared for his release from the jail with the Orissa High Court granting him bail in the last case registered at Golanthara police station on Friday after he furnished Rs 2 lakh and bail bond of Rs 1 lakh with two sureties.

He avoided the waiting medipersons as the court had directed not to give any interviews and make any public comment in connection with the cases against him or other co-accused on being released from the jail.

Panigrahy has been in judicial custody since his arrest on December 3 last year in connection with an alleged job scam.

While the CID-Crime Branch had booked him in one case, four cases were registered at Golanthara police station and another at Baidyanathpur police station. He was accused of collecting money from youths on behalf of Akash Kumar Pathak, son of suspended IFS officer Abhay Kant Pathak, with the promise to provide them jobs in TATA motors.

The MLA had to furnish cash security of Rs 69.5 lakh in total for bail in the six cases.

On Thursday, the HC had granted him bail in a case lodged at Baidyanathpur police station on furnishing cash security of Rs 6 lakh and bail bond of Rs 2 lakh with two sureties.

On June 1, the HC had accepted his bail plea in the three cases on furnishing cash security of Rs 6 lakh, Rs 3 lakh and Rs 5 lakh, respectively, and bail bonds of Rs 2 lakh with two sureties in each of the cases.

He had got bail in the cases registered by CID-Crime Branch on February 24 on furnishing 24 lakh and bail bond of Rs 5 lakh with two sureties.

Since the former minister was accused of duping job aspirants to the tune of Rs 47.45 lakh in the case registered by the Crime Branch, the high court on February 24 asked him to give an undertaking stating that he would deposit an additional amount of Rs 23.45 lakh in five instalments of Rs 5 lakh each by the end of March, April, May, June and last instalment of Rs 3.45 lakh by the end of July.

Among other bail conditions, he has been directed against contacting any of the prosecution witnesses or tampering with evidence and any inducement, threat or promise.

Odisha MLA Asked To Cough Up Rs 47 Lakh For Bail; Know Why