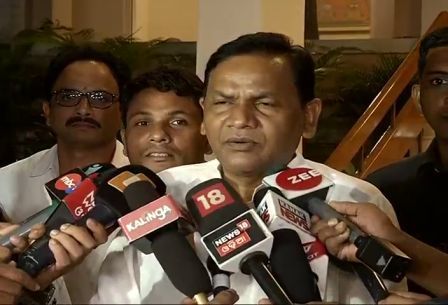 Bhubaneswar: Senior BJP leader and Leader of the Opposition Pradipta Naik has urged the Odisha government to declare Kalahandi district as a green zone.

Naik made the appeal in a letter to Chief Minister Naveen Patnaik.

The BJP leader wrote that Kalahandi ranks second in Odisha in paddy production (about 3 tonnes a year) and the leading district in cotton production (about one million tonnes a year) and therefore the farmers require a lot of labourers for harvesting and selling their products at the mandis (procurement centres). If the harvesting is not done in time, the farmers will sustain heavy losses, he mentioned.

“While the farmers of the district have sustained massive crop loss due to the untimely rain this year, the decision of the state government to declare the district as orange zone in view of the outbreak of COVID-19, has compounded their misery,” he added.

The BJP leader further said that the two corona patients of Kalahandi district, who were quarantined for 14 days after testing positive for the virus, have been completely cured. Since then, not a single case of COVID-19 patient has been detected in the district. On the contrary, there are COVID-19 patients in the districts that have been declared as green zone, he pointed out.

Justifying his contention, Naik requested the Chief Minister to declare Kalahandi as a green zone to enable the farmers and labourers to take up the agricultural activities.