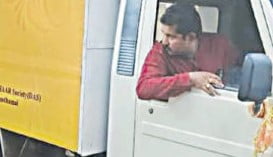 Kandhamal: Here is one officer who has no qualms about taking to the driver’s seat of a tempo to ensure that some people get their food on time.

Baladeb Behera, Municipality Executive Officer in Phulbani area got know that the driver of the tempo that delivers food to an Aahar Kendra is on leave. So he lost no time and hopped on to the driver’s seat himself and drove to the destination.

Cooked food is supplied to  the District Headquarters Hospital Aahar Kendra from an  Aahar centre near the bus stand. Since the driver had taken leave, the employees were planning to send the food in auto rickshaw, which is against the rules. Before they could think of an alternative, Behera swung into action to deliver the food in time.