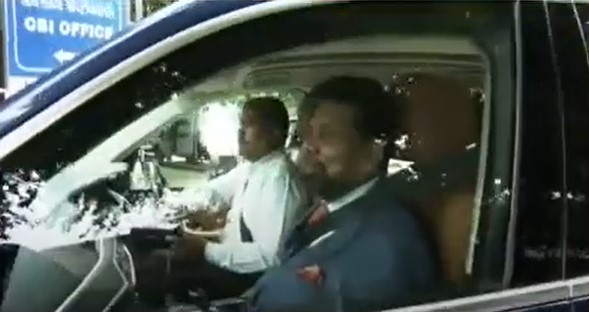 Bhubaneswar: Following the CBI raid on his office and house, Odisha industrialist Mahimananda Mishra appeared before the Central investigation agency in its Bhubaneswar office on Friday.

According to sources, CBI has arrested three people including the chief mechanical engineer of Paradip Port Authority Saroj Das, and contractor Sumant Rout in this connection today. The CBI team from Delhi had interrogated Das and Rout during the raid on Thursday.

The CBI conducted the raids on the properties of Mishra, including his house and office in different locations in Cuttack and Paradip. Searches were carried out at Odia Bazaar in Cuttack and Odisha Stevedores Limited offices at Link Road and Badapadi in Paradip.

Though the reason for the raid is yet to be ascertained, reports suggest that it could be related to some alleged irregularities in Paradip Port Trust.

Notably, the industrialist was granted bail from Orissa High Court in November 2019 in connection with the murder of Mahendra Swain, an executive of Hyderabad-based stevedoring company Seaways Shipping and Logistics Limited. He is accused of hiring killers to eliminate him.

Mishra was arrested by Thailand’s Immigration Police in Bangkok on December 25, 2016. According to the Bangkok Post, Mishra along with some of his family members and a handful of security guards had entered Thailand on a tourist visa from Nepal. Odisha police too had confirmed that Mishra and his aide Basant Bal had escaped to Kathmandu on a 15-day tourist visa after hiding at several places in the country following Swain’s murder.

Democracy Is Dead In India, There Is Dictatorship Only: Rahul Gandhi