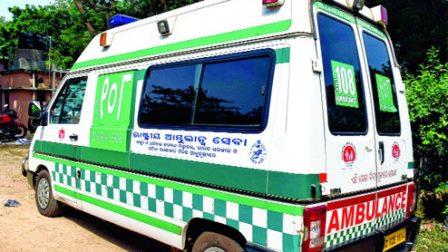 Bhubaneswar: An Odia couple from tribal-dominated Mayurbhanj district, Niranjan Behera and Geeta Behera, claimed that their infant son — who was in urgent need of medical attention — died as the ambulance driver and pharmacist took a long lunch break.

As soon as the 108 ambulance, with parents and the infant onboard, left the PRM Medical College and Hospital, the pharmacist and the driver took a lunch break assuring to come back quickly.

The parents waited for an hour, but the driver and the pharmacist didn’t return. As Behera went to the eatery to enquire, they turned him away saying they knew the child’s condition.

“They came after about 90 minutes and by then it was all over. Had the driver and the pharmacist not taken a long lunch-break my nephew would have been alive now,” Paramanand Behera, maternal uncle of the deceased child, claimed.

However, as the ambulance resumed its journey for Cuttack, the condition of the child worsened and at Krishanachandrapur area, 10 km from Baripada, the child collapsed. The baby was then admitted to the Krishanachandrapur community health centre, where the doctor declared the baby dead on arrival.

However, district coordinator of the operator of 108 ambulance Ziqitza Healthcare Limited, Sayan Bose denied of any delay on part of the ambulance driver. “They had gone for lunch for just 20 minutes,” he said.

Travesty Of Democracy: How Big Money Is Slamming The Doors On Free Politics