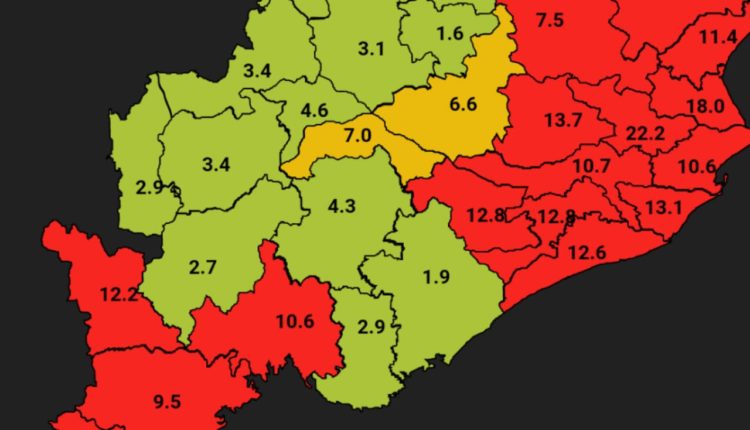 Bhubaneswar: With the Lockdown 3.0 ending on July 17 and COVID graph showing a declining trend, speculation is rife that the Odisha government would soon begin the unlock process in a phased manner.

Director of Health Services Bijay Mohapatra on Wednesday informed that discussions are for lifting lockdown restrictions in certain districts.

“The government is considering to start the unlocking process by relaxing certain restrictions in districts, where the test positivity rate (TPR) has dropped below 5 per cent,” he said.

Notably, the TPR has remained below 5 per cent in several western Odisha districts.

According to the government dashboard, Deogarh has recorded the lowest TPR of 1.6 per cent on June 8, followed by Ganjam (1.9 per cent), Jharsuguda (2.5), Kalahandi (2.7 per cent), Sundargarh (2.8 per cent), Nuapada and Gajapati at 2.9 per cent, Sambalpur (3.1 per cent), Balangir and Bargarh at 3.4 per cent, Kandhamal (4.3 per cent) and Sonepur (4.6 per cent). Most of these districts have been reporting fresh infections in two digits.

Also Read: 12% Drop In COVID TPR In 17 Days; Odisha Hopeful Of Further Dip By Next Week

However, Jajpur and Cuttack have been showing higher TPR at 22.2 per cent and 18 per cent respectively.

During a review meeting on Tuesday, Chief Minister Naveen Patnaik had also indicated that Odisha might start a phase-wise unlock process in the districts where the positivity rate has shown marked improvement. The decision will be taken basing on the suggestions from Technical Task Force Committee, he said.

While extending the lockdown for 16 more days on May 30, the government had announced a slight relaxation in Nuapada, Gajapati and Sundargarh, where COVID cases had declined drastically.

COVID Lockdown Will Bring Down Road Mishap Deaths In Odisha!