Odisha MP-Actor Anubhav Mohanty Thanks ‘Anchor’ Jagrati Shukla For Being A Friend In Need!

FeaturedEntertainment
By OB Bureau On Dec 10, 2020 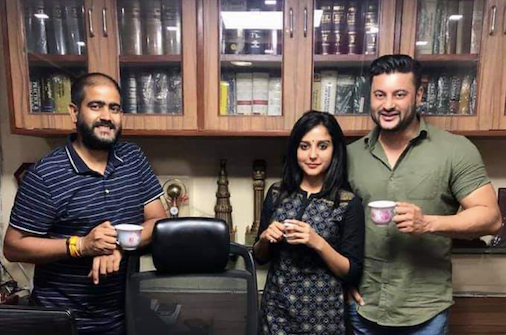 Bhubaneswar: Actor-turned-politician Anubhav Mohanty on Thursday shared a picture to thank his friends, who have stood by him and been the reason for his smile amid the ongoing legal tussle with wife Varsha Priyadarshini.

It was the birthday of his lawyer Ashwani Dubey, who has been in the news since Anubhav filing for divorce from Varsha hit the headlines in September this year with the latter accusing the Kendrapada MP of domestic abuse and demanding restoration of conjugal rights.

In the picture on his Facebook account, Anubhav can be seen having tea with Ashwani and Jagrati Shukla, a journalist, and consultant at Lok Sabha TV.

“Thanks to much respected Jagrati Shukla Ji for being a wonderful friend & also giving me selfless friends who make me smile when I need it the most,” he wrote in the post, which included birthday wishes for Ashwani.

Anubhav had earlier shared a post of Jagrati on his Facebook page appreciating her for wearing a Sambalpuri saree.

Meanwhile, the marital discord between the Ollywood couple continues to take an ugly turn with every passing day. On December 9, Varsha lodged a police complaint against a fan-club page of Anubhav on Facebook for allegedly posting vulnerable comments against her.

In her complaint, the actress also accused Anubhav’s fans of posting her picture on the page and writing obscene comments under it. “As thousands of people follow the page, it has adversely affected my image,” Varsha told police.

On the other hand, the fourth round of mediation for possible rapprochement by Supreme Court-appointed mediator advocate Puja Anand with the couple on November 25 also remained inconclusive.

In September, Varsha had filed a domestic violence case against her husband under several sections of the Protection of Women from Domestic Violence Act and accused him of physical and mental torture and violence, including financial treachery. She had also filed another case in the district family court under Section 9 of the Hindu Marriage Act, in which she, as an aggrieved party, sought a decree of restitution of conjugal rights.