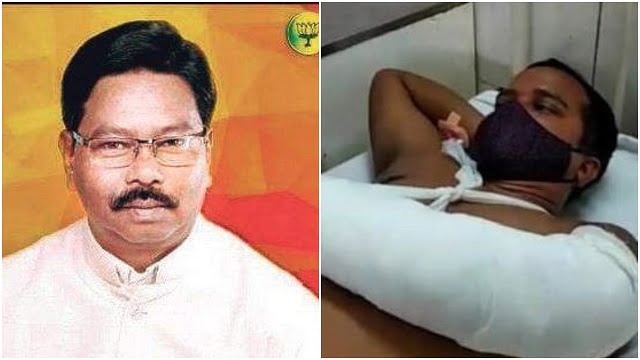 Bhubaneswar: A case has been registered against Union Minister of State for Tribal Affairs and Jal Shakti Biseswar Tudu for allegedly assaulting two government officials in Baripada in Odisha’s Mayurbhanj district.

The case has been registered at Baripada town police station. “It is under investigation,” said K K Hariprasad, Sub-Divisional Police Officer (SDPO) of Mayurbhanj.

Tudu has refuted the allegations.

Both District Planning Board Deputy Director Ashwini Mallik and Assistant Director Debashis Mohapatra sustained injuries in the alleged assault and are undergoing treatment at the PRM Medical College and Hospital in Baripada.

Mohapatra has fractured his arm.

Speaking from his hospital bed, Mohapatra said, “The Union Minister’s PA called and asked me to reach the party office at Takatpur with MPLAD files, which Tudu wanted to see. I said I was in a meeting and would go later in the day. I then spoke to Mallik, who said that it was improper to meet the Minister with government files at a political office as the Model Code of Conduct was in place because of the upcoming panchayat polls.”

“Mallik then called Tudu’s office. His PA answered. Mallik suggested that we can meet the minister at the Circuit House or Planning Office. His PA said that he would speak to the Minister and get back,” Mohaptra further said.

“His PA called back and said that the Minister was in Bazar India (a mall in Baripada) and we can meet him there. We again suggested that the Circuit House would be a better place for the meeting,” he said.

“Then Tudu called and spoke to Mallik. When we reached, he asked where are the files. We said that it was not right to bring the files there. He lost his temper and said ‘don’t teach me protocol’. He picked up a rod first which he put away. He then grabbed a plastic chair and hit me thrice. He also assaulted Mallik thrice with the chair. He threatened to kill us and used foul language,” Mohapatra alleged.

The BJD has demanded the dismissal of Tudu.

“We condemn the incident. Two government officials are called by a Union Minister, then are assaulted by him resulting in a fractured arm and other injuries requiring hospitalisation. It’s unfortunate that a Union Minister indulged in hooliganism,” said Krushna Nanda Mohanty, BJD’s Baripada town president.

“The people of Mayurbhanj are shocked by Tudu’s action. How can Prime Minister Narendra Modi make him the MP of Mayurbhanj. The district’s people are very simple. After Tudu became Minister, he has been casting aspersions on government officials. He should be dismissed and arrested,” he said.