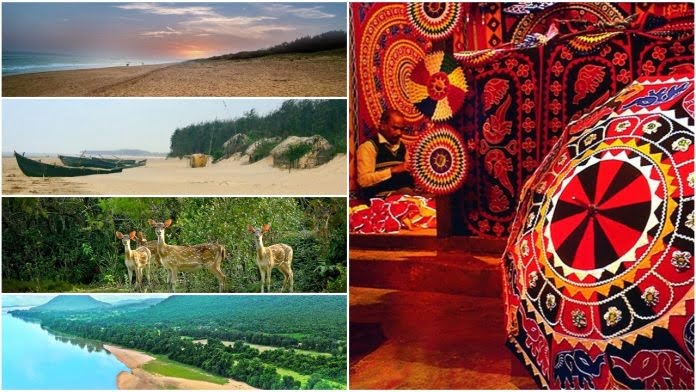 Bhubaneswar: Experience tourism is the new buzzword and Odisha is leaving no stone unturned to provide this motivation through encounters with new places and leisure activities for travellers heading to the state .

It won’t be long before tourists get a chance to soak in the white sand of Konark, enjoy a leisurely stay on a houseboat in the backwaters of Bhitarkanika and Chilika and enjoy water sports, along with a taste of royalty in India’s Best Kept Secret – Odisha.

In an interaction with Odisha Bytes, Tourism Secretary Vishal Dev gave a peep into the vision document that is being readied. Excerpts:

Tourism became a priority only recently. Today, we can say it is one of our priority agendas, but it was not the case, say about 20 years back.

Besides, awareness about Odisha is very low. We often refer to West Bengal to help people place Odisha on the map. It is Jagannath and a little bit of Konark that people associate the state with. Once I had an argument with a person, who insisted that Rourkela is in Bengal. Therefore, promotional efforts have to go up.

In the next five years, the tourism landscape of Odisha will change. We have big plans.

We get one crore domestic tourists and one lakh foreign nationals, as per our latest figures. The ratio is 1:100. Even if we go all out to improve inflow of foreign tourists, the rise would not be substantial. So, attracting domestic tourists is far more important. We have to ensure that Odisha figures in their travel itinerary.

The other area that we are looking into is having seven to eight large hospitality chains in the state. If a foreign traveler gets to see a Radisson or Holiday Inn while browsing for hotel stay in Odisha, it will give them the confidence to visit the place.

There are 257 recognised tourist sites in Odisha. With the budget that we have, we end up spending Rs 10 to 12 lakh on every site and it makes no sense. We will now be focusing on nine circuits or destinations only and bring them to the level of international standard.

Chilika – Two islands will be developed with basic infrastructure, road, power, water and plots marked to allow private investors to set up resorts.

Golden Triangle– There is a plan to develop a one-km stretch near Konark with beach shacks, eateries, activities and a nice corridor. It will be developed into an active and vibrant zone where people can play, eat and have fun. We have already come up with a Request for Proposal (RFP).

Project Shamuka – It is charted to be developed as a special tourism destination. We have got the required clearances. It is a huge project, and dates back to 2008. Lot of things have changed on the ground since then and accordingly, a world-class master plan is being prepared. Funds have been placed with Idco for the boundary wall. We plan to bring it to a level, where we can invite private investors to set up facilities.

White Sand Festival – It is being planned on the lines of Kutch Rann Utsav of Gujarat. We will put up 50 tented accommodation at Konark, where people can stay and enjoy cultural activities for 30 days. The duration will be increased based on the response. We had planned it for last December, but had to drop it due to time constraints. We are aiming for this December or next year definitely.

Buddhist Circuit – An international mini Buddhist city will be developed over 400-500 acres. Though the Buddhist sites have not been included in the Swadesh Darshan Scheme, whatever we have is good enough to have a big vision for the area. People should be able to come and stay there for two three days. That should be a product by itself.

Houseboat Facility – To boost inbound tourist flow and enhance their experience, we have decided to allow two houseboats at Bhitarkanika. In a maiden outreach to owners and operators of luxury houseboats, a three-day familiarisation trip was recently held at Bhitarkanika National Park and Chilika lake. We had 24 operators from six states and most of them were from Kerala. They were surprised to see the unexplored backwaters here, which they felt was far more beautiful than that in their own state. We are also in the process of identifying the spots to promote water sports.

Heritage Tourism – To encourage royal families of Odisha to open the gates of aura and magic of their ancestral abodes to travellers from across the world, the Tourism Department had invited them to the Tourism Conclave in 2017. And as they say, the rest is history. Six such palaces, including Gajalaxmi Palace in Dhenkanal, Mayurbhanj’s Belgadia Palace, Aul Palace, Nilgiri Palace, Rambha Palace and Kanika Palace, are operational in small ways and by next year, we will have 10 of them up and running. Nine more heritage properties will be added to the list in the near future.

Last But Not The Least

Talasari Beach at Chandipur, Similpali, Deomali and Satkosia are the other focus areas.

The idea is to attract investors who can start resorts and hotels. Promoting tourism within the state is also a priority and it will be done by providing proper infrastructure and budget hotels.

Tourist Couple Allegedly Bashed Up By Bus Staff In…