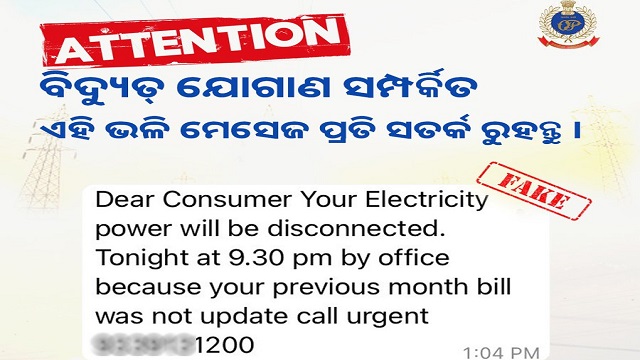 Bhubaneswar: After TPSODL, Odisha Police has warned the people of fake messages on electricity bill payment and power disconnection after several cases of cyber criminals duping the power consumers of lakhs of rupees came to its notice recently.

The police have advised everybody to verify such messages with the power distribution companies before making any online payment to unknown senders. “If you receive a message from an unknown number saying that your electricity bill is due or if you receive a warning about disconnection of electricity, kindly verify the fact,” tweeted Odisha Police.

The people have also been asked to contact the police as some cyber fraudsters are trying to mislead people by sending such messages.

It is pertinent to mention here that the Tata Power Southern Odisha Distribution Limited (TPSODL) had also advised its consumers to be aware of such messages on August 19.

In an advisory, the company said some ‘unscrupulous elements’ were misleading the people with messages/SMS of power supply disconnection as their previous month’s bill was not updated. “Similar fake messages of updating KYC were sent to people in May. Such individuals have been engaging with customers without any authorisation of TPSODL,” said the company.

TPSODL further said its dedicated 24×7 toll free No. 1800-345-6797/ 1912 is a one-point solution for all grievances and appealed to the customers to immediately report any such message/call asking for transaction or banking details.

6 Members Of Family, Including 2 Children, Found Dead In Haryana