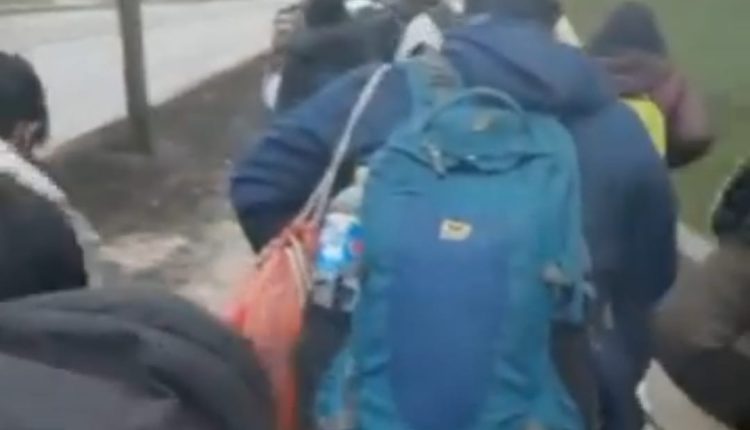 Bhubaneswar: Indian nationals stuck in Kharkiv just had a few hours to leave the war-ravaged eastern city of Ukraine amid Russian shelling on Wednesday. The Indian embassy had issued an “urgent advisory” that “under all circumstances”, Indian citizens must leave Kharkiv immediately and reach Peschon, Babaye and Bezlyudovka by 6 pm, Ukrainian time, (9.30 pm IST), even as many complained that they were not allowed to board trains at the railway station there.

Then began the last-ditch attempt to flee as the time window, according to India was based on inputs received from Russia. “Since Pesochin is the closest to Kharkiv, we formed teams of all Indian students and decided to start walking at around 3 pm. We are just carrying one bag and our passport,” Pattanaik, a student, told TNIE. They trudged for 11 km to escape to safety.

Some Odisha students had luck by their side and could catch trains to escape Kharkiv on Wednesday. “A majority of us who got onto the trains were girls. The boys could not get into the first train due to resistance by locals and had to wait for the next arrival,” said Liza Kap, who along with two other girls Lozarin Sahoo and Sonali Mishra, managed to board one early in the morning at Studentska railway station after midnight walk from Oleksivska Green Metro.

Notably, a building of Kharkiv National Medical University, where a majority of the Odisha students studied, had caught fire after being hit by Russian missiles on the day.

According to the State Resident Commissioner’s office in Delhi, at least 425 students from Odisha were in Ukraine when Russia launched its military operation and between Friday and Wednesday noon, 28 students had returned to India.

Padmanabh Behera, joint commissioner at the special relief commissioner office here, told TOI that 450 students had reached out to them and they have so far contacted the parents and relatives of 200 stranded students from different districts in the state