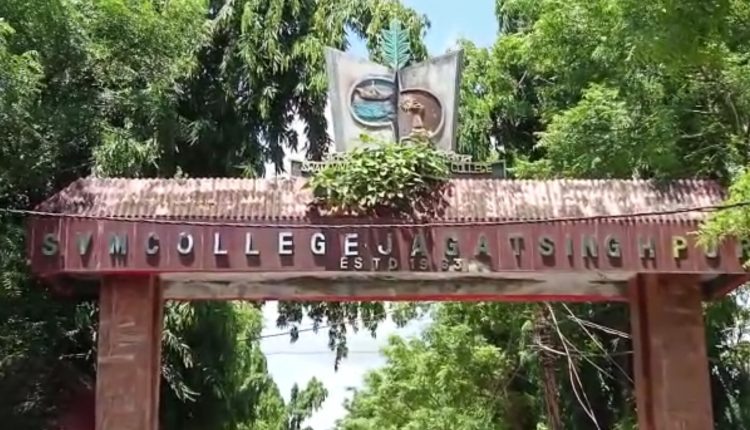 Jagatsinghpur: A notice allegedly signed by principal of a college asking the girl students to produce picture with their boyfriends for entry into campus has sparked resentment among the students in Odisha’s Jagatsinghpur town.

The notice, issued on a pad of office of the principal of SVM (Autonomous) College, Jagatsinghpur, was uploaded on social media. It also carried the signature of the principal and a stamp impression of his office.

“It is mandatory for all girls to have at least one boyfriend by February 14. This has been done for security purpose. Single girls will not be allowed to enter the college premises. They will have to show a recent picture with their boyfriend,” read the notice. 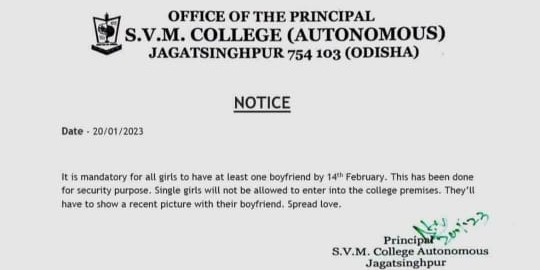 As the notice went viral in social media, the girl students had a meeting with college principal Bijay Kumar Patra to express their resentment and strong opposition to it. The principal assured them that it was a fake notice and he had not signed on official pad regarding this.

Later, the college authorities also filed a complaint at Jagatsinghpur Town police station in this regard.

Speaking to media, the principal said, “It (notice) is an act of some notorious elements to spread chaos and unrest in the campus. It is absolutely false and unfounded. I condemn such action. I want the police to trace the persons who have released the notice in social media and take stern action against them.”

It may be noted that the college has around 5,500 students pursuing studies in Plus II and Plus III courses. Around 60% of the students are girls.

One Youth Drowns, Another Goes Missing While Bathing In Sea In Odisha’s Puri