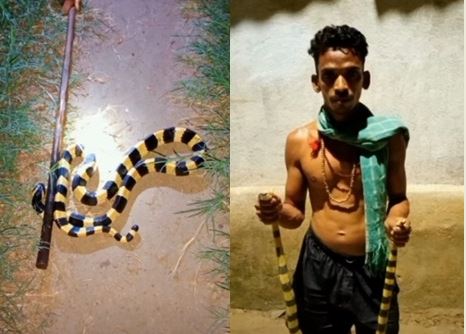 Sambalpur: A man was arrested after forest officials seized six snakes and four chameleons from him at Karanjula village in Odisha’s Sambalpur district.

The man, identified as Ramachandra Rana (31), was arrested after a team of officials from Sadar and Town ranges of Sambalpur forest division raided his house and recovered six snakes, including three cobras, besides four chameleons, a forest official said.

The accused, who has a YouTube channel, used to record videos of snakes and other reptiles after capturing them from different places illegally in order to attract viewers.

“He used to upload the videos on the channel in violation of the IT Act, 2000 and YouTube has been asked to delete the videos and take appropriate action,” in-charge assistant conservator of forest (ACF), Sadar Range, Manu Ashok Bhat told TNIE.

Both the animals recovered from the accused have been categorised as Schedule-II under Wildlife Protection Act 1972 and it is illegal to keep them in house or hunt them.

Investigation is also in progress to ascertain Rana’s involvement in the illegal wildlife trade and a case under different sections of the Wildlife Protection Act 1972 has been registered.