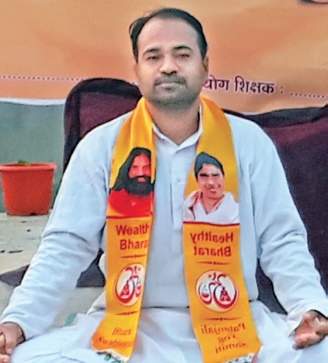 As things become more and more uncertain in India over NRC (National  Register of Citizens) and CAA (Citizenship Amendment Act), that has raised the hackles of most Indians across the country, Hemagiri Block of Sundargarh district in Odisha is experiencing another kind of movement headed by Acharya Rafiq Khan.

Yes, you read it right – Acharya Rafiq Khan, who is from Luhabahal Village in Sundargarh District, and  is working relentlessly to promote Yoga in the tribals-dominated areas of the district and also among the people of his community.

Acharya Rafiq Khan was conferred with the title “Acharya” by Acharya Balkrishna of Patanjali after he completed Yoga course at Patanjali Ashram in Haridwar.

Rafiq Khan performs Namaz daily and also recites Gayatri Mantra and Mahamrutunjay Mantra with equal aplomb. He wears a cap with Allah and Om written its either side. He is an Art teacher who also believes in Ayurveda.

When asked how he became an Acharya, he said, “The word Acharya means a person whose conduct is good and worth imitating or following. After I finished my Yoga training, I was conferred with the title of Acharya. After that I go from village to village to teach Yoga and encourage people to do Yoga.”

He performs Namaz at the designated time and recites Gayatri Mantra before practising Pranayam. He went on to explain that there was no compulsion to recite mantras but as most Vedic mantras are about the wellbeing of living beings, he recites them.

“I am a pure Muslim. I was a Muslim, I am a Muslim and I will remain a Muslim,” was his answer to the question posed by the show anchor of a local news channel in Odisha.

“For good health everyone should practise Yoga. The doors of Yoga are open to everyone. You come do Yoga and be a good human being,” he added.

He also explained the significance of Gayatri Mantra which is quite scientific in nature and gives the message to imbibe the powers of the Sun in human beings, hence a fact that needs to be accepted by all, as it help people to be disease free and powerful.

Acharya Khan, when asked about his dream for the future, said, “I would request our youths to dedicate one hour daily to health and one hour to the nation. We need to work together, irrespective of our caste and creed, and work hard and not stop until we succeed in making India a Global Teacher.”

While Acharya Khan works towards making his dream a reality, our wish, as we are all set to enter 2020, is that hopefully the time is not too far away when people like him become a norm instead of an exception.

US Woman Raped In Rishikesh