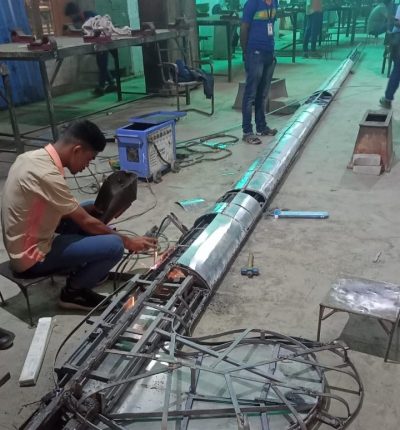 Berhampur: With hockey fever gripping Odisha which is hosting the FIH Men’s Hockey World Cup 2023, the Industrial Training Institute (ITI) at Berhampur in Ganjam district is preparing to celebrate the occasion by setting a world record with hockey sticks.

The students of the state government run ITI are busy making two hockey sticks and a hockey ball with scrap iron. Each hockey stick would have a height of 43 feet and width of two feet. The radius of the hockey ball is about two-and-a-half feet. “This will be the tallest hockey stick and ball structure in the world and we hope to place it in the Guinness Book of World Records,” said Dr Rajat Kumar Panigrahi, Principal, ITI Berhampur.

“The Hockey World Cup is a memorable event for all of us. While people are expressing their happiness in their own ways, we choose to make hockey sticks and ball with scrap iron as we have expertise in ‘waste to wealth’. It would definitely touch the hearts of everybody and be a star attraction,” he said.

Kanhu Behera, a faculty member of the ITI, said the construction work of the two huge hockey sticks and ball has already started for one week. It would take another one week to complete and would be installed in the ITI campus before the start of the World Cup.

The huge structure is made with scrap angular iron wrapped with galvanised iron (GI) sheet and studded with damaged gear, sprocket, chains of bikes and cranks of different vehicles. The weight of each stick would be approximately 2 ton and it would be installed with the help of Hydra machines, said Behera.

The 15th edition of the premier FIH men’s tournament in the world will be played at the joint venues of Kalinga Stadium in Bhubaneswar and Birsa Munda Hockey Stadium in Rourkela from January 13.

“Pariksha Pe Charcha’ 2023 To Be Held On January 27: Dharmendra Pradhan