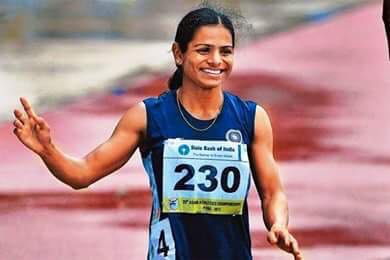 Patiala: Odisha’s Dutee Chand rewrote her own national record in women’s 100m with a time of 11.17 seconds at the Indian Grand Prix Stage 4 on Monday evening.

But she fell agonizingly short of the qualifying mark for the Tokyo Olympics, which is set at 11.15 secs.

Karnataka’s Dhaneshwari (11.48) and Bengal’s Himashri Roy (11.71) were a distant second and third, respectively.

The ace sprinter has broken her own record several times in the last 3 years. On Monday, she bettered her timing of 11.22 secs that she clocked at the National Open championships in October 2019 at Ranchi.

Dutee set another national record as the Indian women’s 4x100m relay team clocked 43.37 seconds. Dutee apart, the other members of the team are Hima Das, Dhanalakshmi and Archana Suseentran.