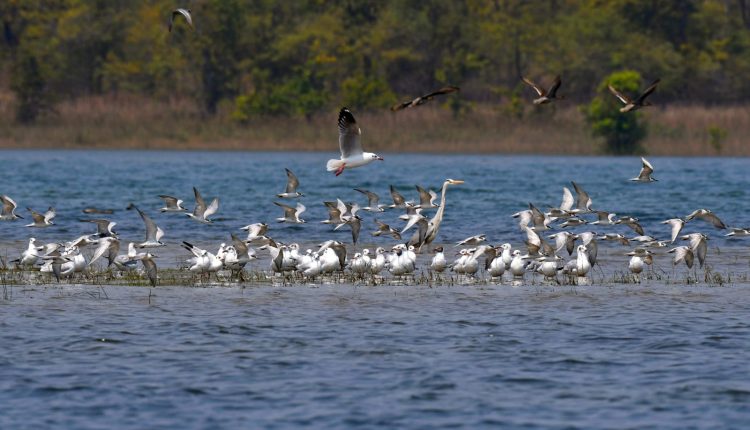 Sambalpur: Hirakud dam reservoir in Odisha’s Sambalpur district received more than 3.16 lakh winged visitors of 108 species this winter, around 1.08 lakh higher than the number of migratory birds sighted last year and the highest in the last one decade.

After the annual enumeration of migratory birds which was taken up on Sunday, it was found that a total of 3,16,676 feathered guests thronged the reservoir this year.

According to sources, the number was 1,08,042 higher than last year when over 2.08 lakh winged visitors of 104 species, including 19 new ones, visited the reservoir.

The state government undertook a census of migratory birds at the 533-sq km-reservoir. Thousands of winged guests from Caspian Sea, Baikal Lake, Aral Sea, Mongolia, central and southeast Asia and the Himalayas, make the reservoir home from November to March every year.

“This was the highest count of birds in the reservoir in winter in the last one decade,” said an official.

The census included an additional 38 sq km area and that could be the reason behind the sighting of a record number of birds this year, another Hirakud Wildlife Division official said.

A total of 30 teams covered all the Hirakud reservoir areas under Sambalpur, Jharsuguda, and Bargarh districts from Hirakud to the Chhattisgarh border. The entire Hirakud reservoir was divided into 15 sectors and each sector was covered by at least two teams for carrying out the bird census.

More than 60 enumerators, including 30 forest officials and some ornithologists were part of the exercise.

Besides, 35 fishermen and boats were engaged in the annual exercise. All the team members were equipped with binoculars, life jackets and other essential gadgets and articles to carry out the exercise.