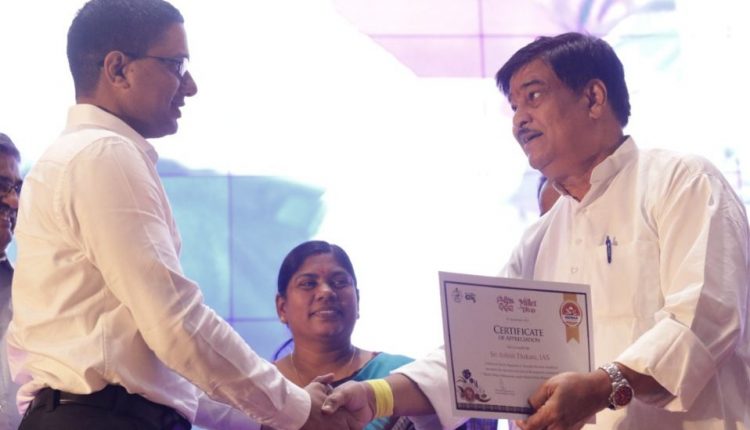 Keonjhar: For initiatives undertaken in the district for promotion of Odisha Millet Mission, Keonjhar Collector Ashish Thakare has been presented the award for ‘Best Performing District On Innovative Initiatives’ category.

Thakare received the award from Agriculture Minister Ranendra Pratap Swain at a function organised on the occasion of ‘Mandia Dibasa’ on Thursday. The Odisha Millets Mission funded under DMF is being promoted in a big way in Keonjhar.

The programme was initiated in Keonjhar district as an extension of the Odisha Millets Mission (OMM) in December 2018. It was a five-year programme funded by the DMF Keonjhar covering mining-affected villages of 7 blocks in the districts — Banspal, Champua, Joda, Jhumpura, Harichandanpur, Hatadihi and Sadar.

The extension and expansion of OMM for next 5 years from 2022-23 to 2026-27 was approved in December, 2021.  It was also decided that 4 new blocks will be included – Telkoi, Patna, Saharpada and Ghatagaon in the district under OMM.

For promotion of improved agronomic practices in Keonjhar, mining affected villages are being targeted for the project as the programme is supported by DMF. A total area of 7000 Ha has been planned to be covered over a span of five years.

To help farmers move from broadcasting (which has very low yield) to more remunerative practices, monetary incentives are provided to farmers via Direct-Benefit Transfer (DBT) mode on successful cultivation of millets through “Improved Agronomic Practices”.

Through Custom-Hiring Centres (CHCs) that are set-up in each block, small farm implements like cycle weeders, markers, sprayers, pump-sets, pipes, etc. are made available to the farmers on hiring basis. These centres are managed by Community Based Organisations (CBOs) like women’s SHGs or Farmers Groups or FPOs.

Procurement of Ragi for price support: The state government has procured Ragi at the MSP of Rs 3377/- per quintal to support Ragi growing farmers for surplus Ragi produced. TDCCOL is the state procurement agency for the programme while a Millet-Procurement Automation System (M-PAS) has been developed for online farmers’ registration, which is facilitated by the Facilitating Agencies (FAs) and CRPs supported under the programme.

Under Ragi Laddu programme for welfare hostel, 39,000 students are getting seven laddus each per week, while under MDM program 2,23,546 students of primary and upper primacy schools will get Ragi Biscuits each per day.