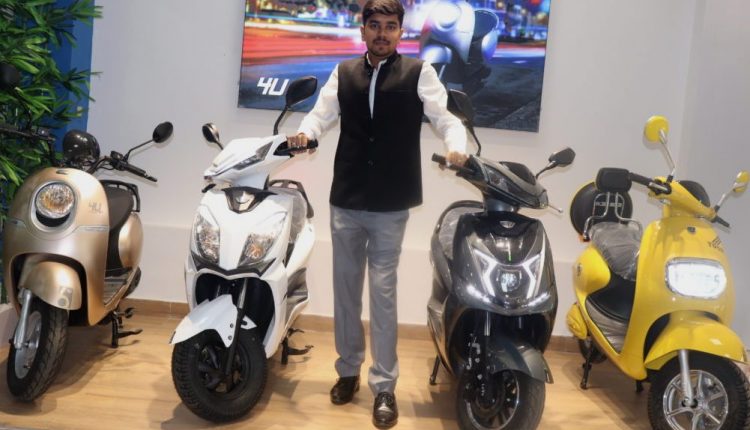 Bhubaneswar: Concerned over deteriorating air quality in the country, a 22-year-old entrepreneur from Odisha has come forward to fighting air pollution.

To accomplish his mission, Harsha Vardhan has set up a manufacturing unit of electronic bikes, brand name ‘EV’, at Badachana in Jajpur district.

“The production of EV bikes has already started. To augment its sale, we have already opened 35 dealer points in Odisha, West Bengal and Andhra Pradesh. Efforts are on to open 250 more dealer points in the state and other parts of the country by March next year,” he said.

After passing out of Sai International School in Bhubaneswar, Harsha completed his graduation from BJB Autonomous College and later pursued a Chartered Accountancy course.

Asked what led him to think about the e-bike venture, the young entrepreneur said he had thought of it during his CA days and then decided to set up the manufacturing unit.

“With a mission to manufacture the indigenous e-vehicles, I had traveled to several places in India and abroad last year and met experts in this field. After getting the technical know-how, I set up the plant at Badachana,” he said.

Harsha comes from a family that deals with the sale of vehicles. “My grandfather used to import foreign vehicles and sell them in eastern India. Later, our family set up a company named Bharat Motors, which now sells different brands of foreign and Indian vehicles,” he said.

“I thought about setting up a manufacturing unit in Odisha for the production of electronic vehicles. As there is a countrywide concern over the alarming rise in the pollution level, e-vehicles will come in handy. These vehicles are electric-driven and never emit smoke as they do not require fuel,” he added.

Are the people of Odisha interested in his indigenous e-bikes? He replied that the people are now very keen. “People who have bought our e-bikes are now pursuing others to go for the same. The prime objective of my mission is to change the lifestyle of the people,” he added.

Talking about his company, Harsha said all his technical and non-technical staff are Odia youth. “I welcome youth with innovative ideas to join hands with me to usher in a revolution to make our state and country free from pollution,” he pointed out.