Olive Ridley Turtles Back For Nesting At Odisha’s Gahirmatha Beach 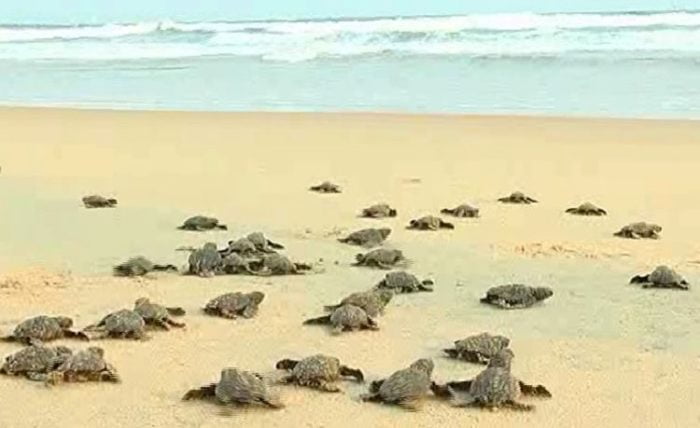 Gahirmatha beach is the world’s largest-known nesting ground of these endangered marine species. Apart from Gahirmatha, these aquatic animals turn up at Rushikulya river mouth and Devi river mouth for mass nesting.

“On the serene surface of sea waters, the turtle surveying teams spotted hundreds of mating pairs along the Gahirmatha coast. Fishing prohibition is presently clamped in Gahirmatha zone to ensure disturbance-free mating of the marine animals,” Divisional Forest Officer, Rajnagar Mangrove, Bikash Chandra Dash was quoted as saying by HT.

After the end of the mating season, most of the male turtles usually return, leaving behind the females to lay their eggs, he said. The female turtles virtually invade the nesting beaches, usually at the dead of the night for laying eggs, the phenomenon described as ‘arribada’. After indulgence in instinctive egg-laying, the turtles leave the nesting ground to stride into the deep seawater. Hatchlings emerge from these eggs after 45-60 days.

It is a rare natural phenomenon where the babies grow without their mother, the officer was quoted as saying.

Sea fishing is banned in Gahirmatha marine sanctuary throughout the year as the seawater here is the most conducive habitat for these delicate species.

Around 7.30 lakh olive ridley turtles had turned up for their annual sojourn of mass nesting in the 2019-20 season. The female turtles had emerged from the sea to crawl on to the serene beach and dig pits to lay millions of eggs, the report added.

2 ATMS Looted In One Night In Odisha’s Balasore